Some progress on several projects

For the last six or seven years (I haven't counted!) I've taken part in the Rainbow Scrap Challenge, organised by Angela at SoScrappy. Speaking of rainbows, heading for my "Rainbow" box on Sunday I saw this: 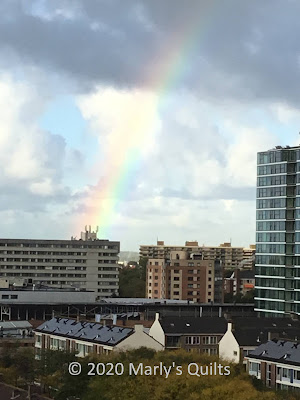 It was brighter when I saw it first, but I needed to grab my I-Pad.
The reason I was going for my rainbow box was to make an overview of my bead blocks: 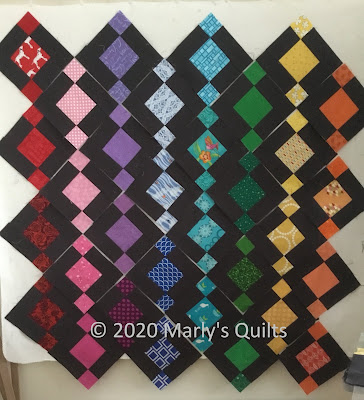 I wanted to see how many more I need to make into a lap quilt.  I'm almost there! I have three red, two pink, two purple, one yellow and one orange that didn't fit on the wall, but I still need more for an on point layout with an odd number of blocks in each direction. Three more of both light and dark blue will make two blue columns, and one turquoise, and one green block will make the number of rows right too. I won't be making brown or black beads - this is dark enough as it is!
My other RSC project still doesn't look like much.
but the Scrap snap blocks have been serving as leaders and enders this week too.
I finally made a start yesterday on row 11 of the Sugaridoo Bernina QAL: 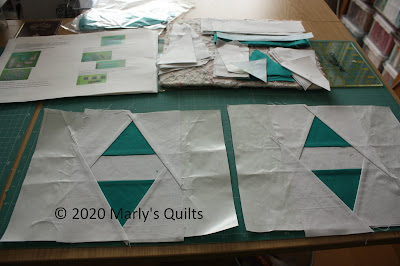 A year ago I avoided foundation paper piecing like the plague! Even though I had had a personal demonstration from Irene (Sugaridoo), herself! In this quilt along she has included several foundation piecing rows, and demonstrated two methods which don't involve tearing out the paper at the end. That's one headache less, but the process still makes me nervous.
Neither EPP nor FPP in the Hemisphere QAL organised by Sheila Christensen, but straightforward machine piecing. This is my block 13: 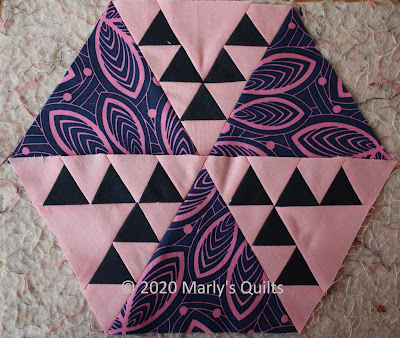 And these are all my blocks so far: 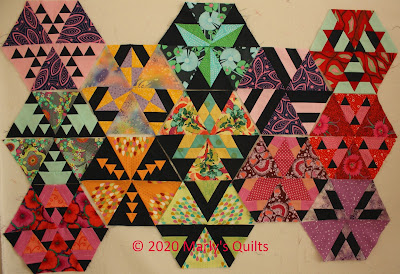 This is definitely not the final layout! The blocks are all too pretty to be stealing one another's thunder.
I completed three of the four embroidered panels for the FaLaLa QAL organised by Jaquelynne Steves.

I don't like the fourth panel, so I will probably make a second star.

Finally this week, a trip yesterday to Aphen aan den Rijn (about 80 km round trip) to buy yarn for a shawl I intend making from the pattern of the Queen CAL by Tinna Thorudottir Designs on Ravelry (#tinnahekl). 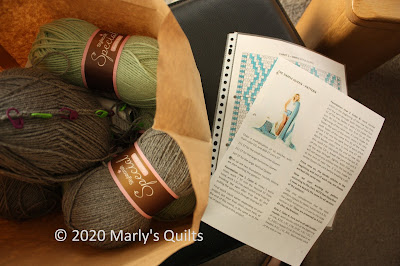 The pattern uses seven colours in a small blanket, but I'm just using these two. I want it to be finished this winter, and it will be approximately one third of the size of the original blanket which would keep me hooking for years. Anyway with so many quilts, who needs a crochet blanket? Not me, at the moment anyway.

Until I came to write them down I had no idea I had so many projects actively on the go. I'm not sure it's such a good idea to have so much on the go, and also know there are more waiting for attention.

Click on the buttons to see what others are making.
Keep safe and healthy
Happy sewing
Marly.
Posted by Marly at 15:55

Your Bead blocks are SEW dynamic with that black background!! I'm looking forward to seeing those scrappy YELLOW Snap Scrap blocks come together. That's another pattern I'm considering for next year's RSC.

Fun to see what you've been working on, Marly! I love those bead blocks - they make such a neat design. Do you know what you'll use for those border triangles?

All great blocks, but I especially like the hexies!

I so love your Bead Block all together like that. That's going to be one gorgeous quilt. I also love Hemisphere too. Good luck with the new crochet project. Looks complicated. ;^)

You sure have been busy with some fantastic projects. Those beads remind me of those beads that used to hang in doorways back in the 70s. I am especially in love with Hemisphere.

Those bead blocks are so striking in black. Beautiful yarns you selected for your project. I like having a few options of projects so I have something I am usually in the mood to work on! Happy stitching.

Now just how many projects do you have on the go?? All beautiful but my favourite is Hemisphere!

You have been keeping plenty busy! WOW!