Not much optical illusion here yet:

but I thought I'd share the process with you. I'll be posting again on this project over the next few weeks (and knowing me - months!)

I started sewing it yesterday, but I've been working on it since the beginning of November. This is a course at Quilters Palet in The Hague to make an optical illusion quilt, but without a standard pattern. Each participant was given about six grids that can serve as the base for the design and the first session (and a few more evenings) was spent in drawing more lines and colouring until a satisfactory result appeared. I tried using several grids before I arrived at this one.

Then choosing the fabric. I've since seen a black and white quilt on Pinterest (unfortunately the name of the maker is not given in the original post) using this grid as the basic design and that would have been easier, but I chose four shades of yellow and five of green and the dark purple as the contrast colour. It doesn't look like it but there really are four different yellow solids in the photo above, along with the lightest green and a lot of purple.


At the same time the A4 sheet with my original design had to be blown up to mammoth proportions,


the strips traced onto dressmakers' pattern paper (all 23 of them), and then pieced paper piecing style.

I started with the narrowest strips because I needed to check that the smallest blocks are more than ¼" square because of  the seam allowances. I'm going to sew these together next and see how they go, otherwise I 'll scrap them and just leave out these rows.

The next, and final, lesson is on 9 January so I hope to have something more than four rows to show. I have no idea how I'm going to quilt this, or whether I want borders or not. Still lots to think about and decisions to make. 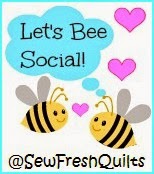 So head over there to see what else has been going on this week.

Thanks everyone for your input last week. Your overwhelming advice was that the piano keys border would be too busy. I need to make up the size with a border but it will be plain off-white. But now I'm about to ask for advice again.

This, my friends is as far as I've got: 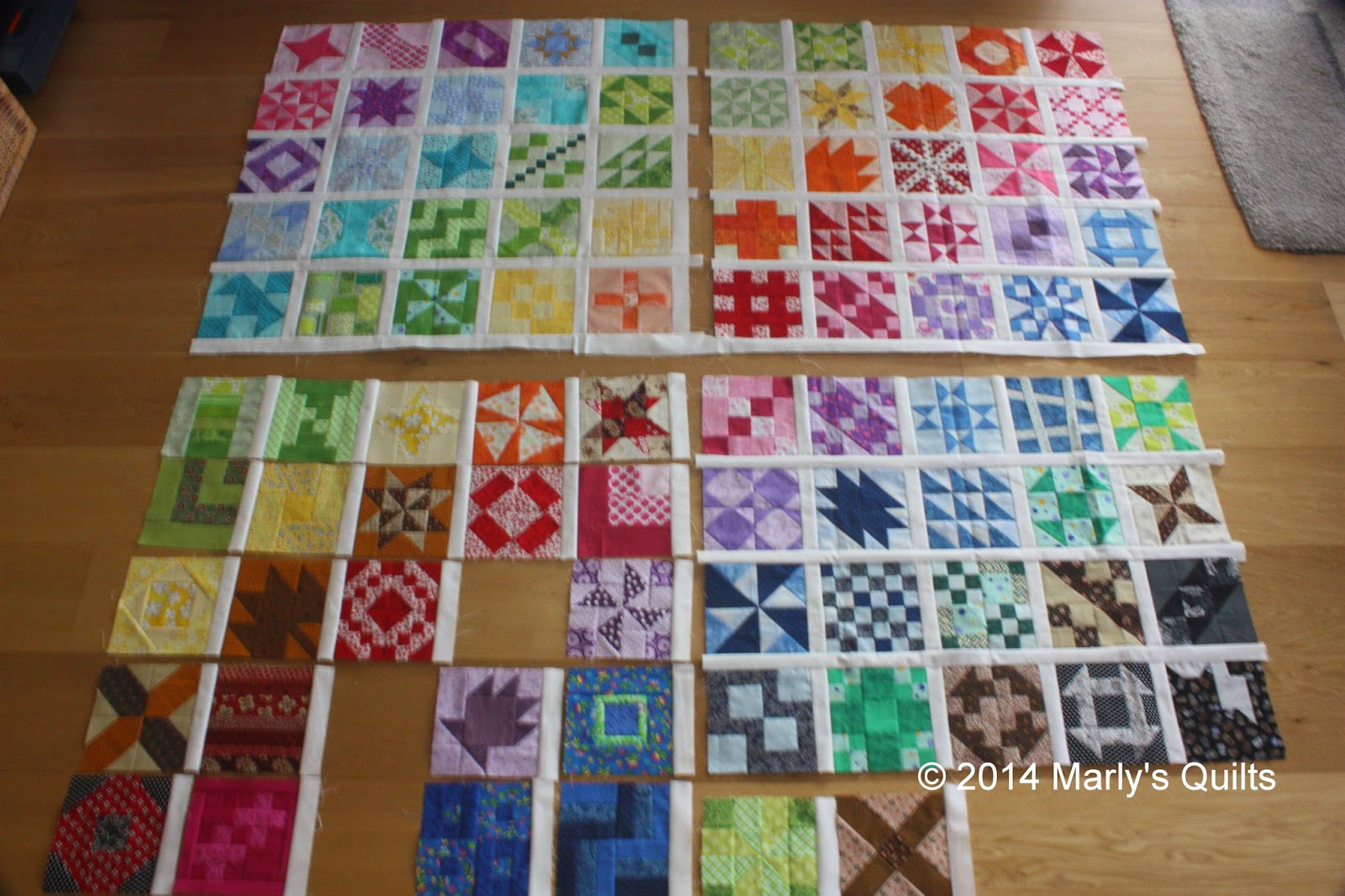 By Wednesday three quarters of my scrappy rainbow quilt top was joined together in three sections The fourth quarter (bottom left, above) was waiting for two pink blocks, but they're going to have to wait until I can buy more pale pink fabric.

I am going to quilt this in four sections and then join together afterwards. But now here comes the

when would you advise me to add the borders?

As I see it there are two options:


Just writing it out has helped me a lot! But I would really appreciate your advice as I'm sure there's a pitfall somewhere I've overlooked.

so call in there today and look over the rainbow.

Email ThisBlogThis!Share to TwitterShare to FacebookShare to Pinterest
Labels: RSC14

One quarter of my rainbow top is nearly there! 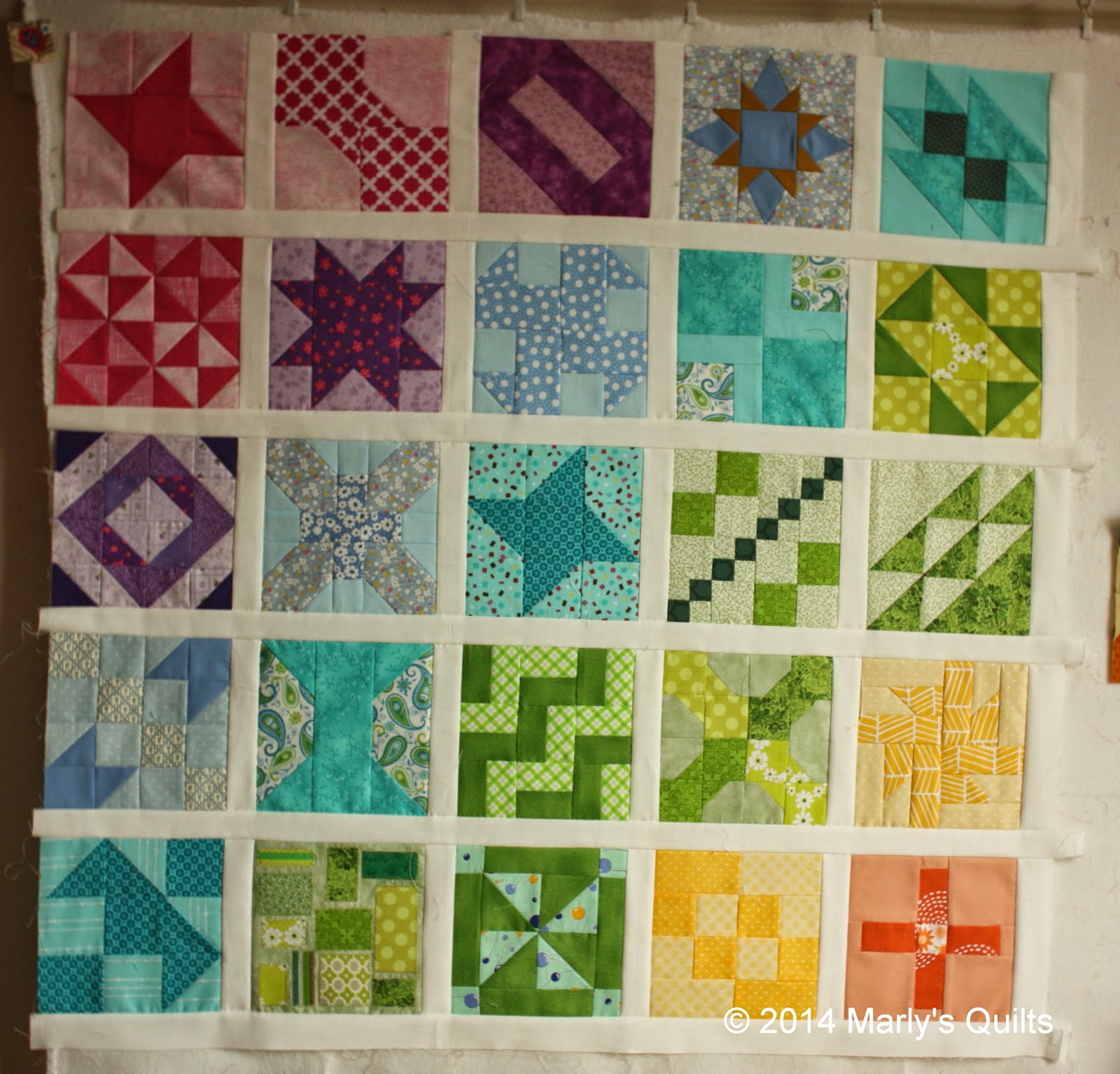 I'm going to quilt this in four sections and then join them QAYG style. I've never done that so it's fingers crossed!

Before I start quilting though I'm going to have to add border(s) because I need a little extra width and length. I think 4" all round should be enough. I can't decide whether to do one plain off-white border 4"wide, or a 1" off-white border and a rainbow piano keys border on the outside. Give myself a lot of extra work! So friends, any suggestions?

All the other blocks already have their right hand side sashing attached and are waiting for space on my design curtain.

so head over there and see some more scrappy goodness.

Email ThisBlogThis!Share to TwitterShare to FacebookShare to Pinterest
Labels: RSC14

I never posted about this quilt because I made it in the summer of 2013, about four months before I started blogging. 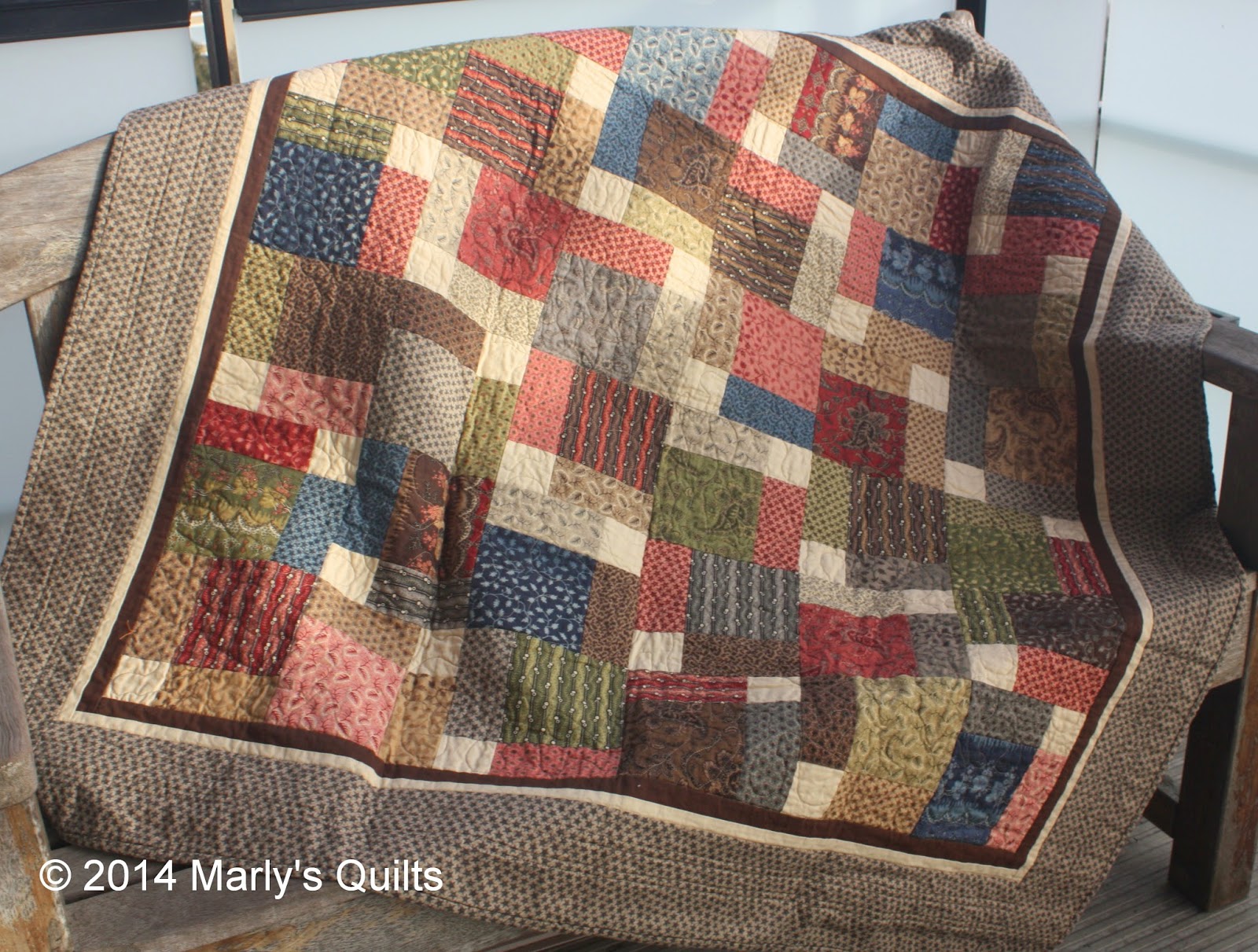 So here now is an account of the lap quilt I made for my husband's birthday in 2013.

In the middle of winter he suggested that as he was feeling rather cold while watching TV, I might be interested in making him a quilt. No sooner said than started! Well, started ... planning!

I found a pattern fairly quickly: this is the Disappearing Nine-Patch which I saw on YouTube from The Missouri Star Quilt Company. 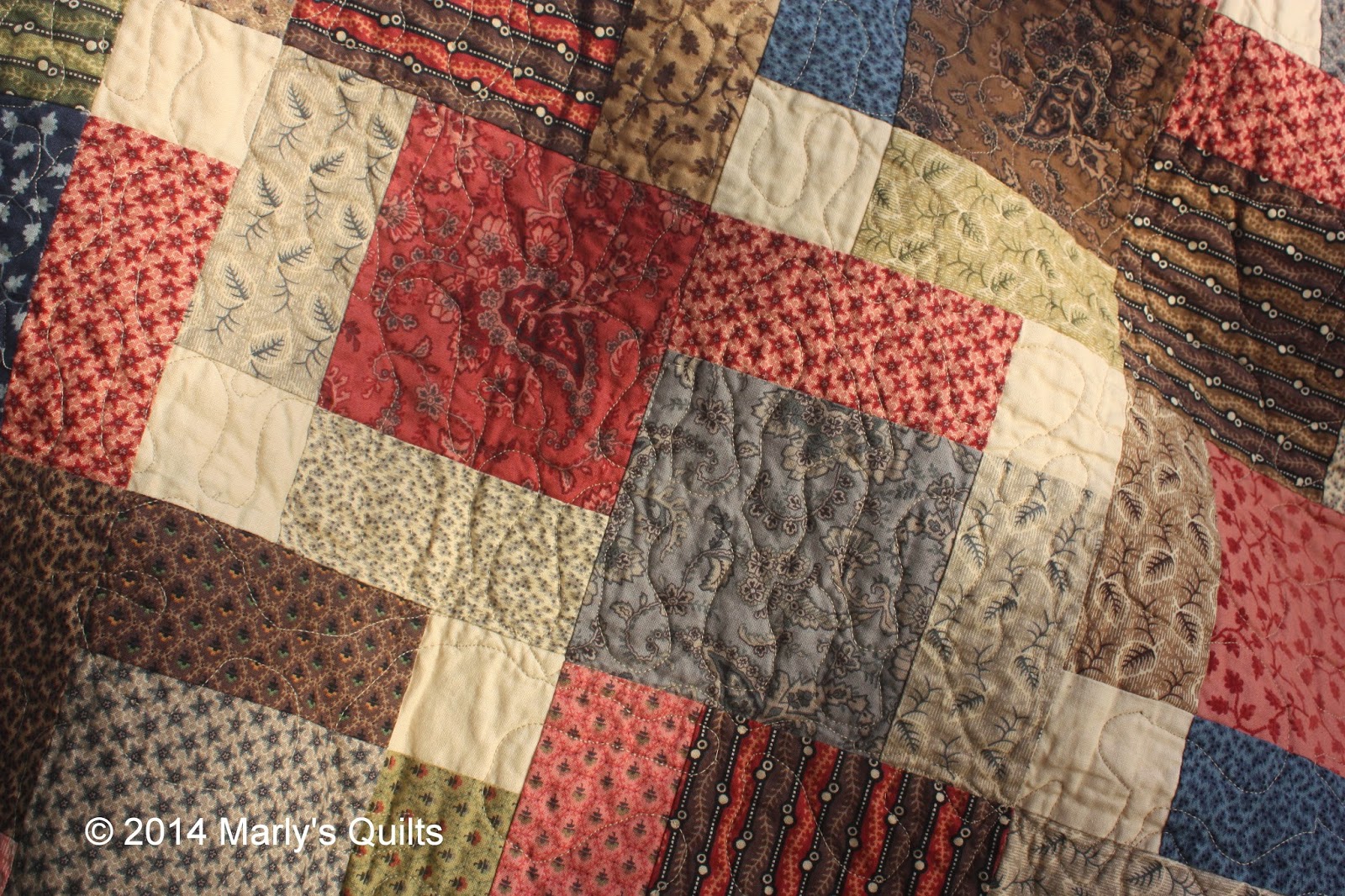 For the fabric I had to wait until I could make a trip to the LQS, which doesn't carry many pre-cuts, but fortunately did have two charm packs of Barbara Brackman's "Metropolitan Fair", which purveys the necessary sense of conservative manliness for this project. To this I added the end of a roll of "Battle Hymn" (also by Barbara Brackman) for the backing, and half a metre of a Bella Solid (I believe "Sand" but I'm not certain any more) which matched the base dye of the printed fabric (the background colour in the selvedge). From this I cut 5" squares to use as the centre squares in the nine-patch (they get cut once in each direction during the disappearing trick) and for the middle border. 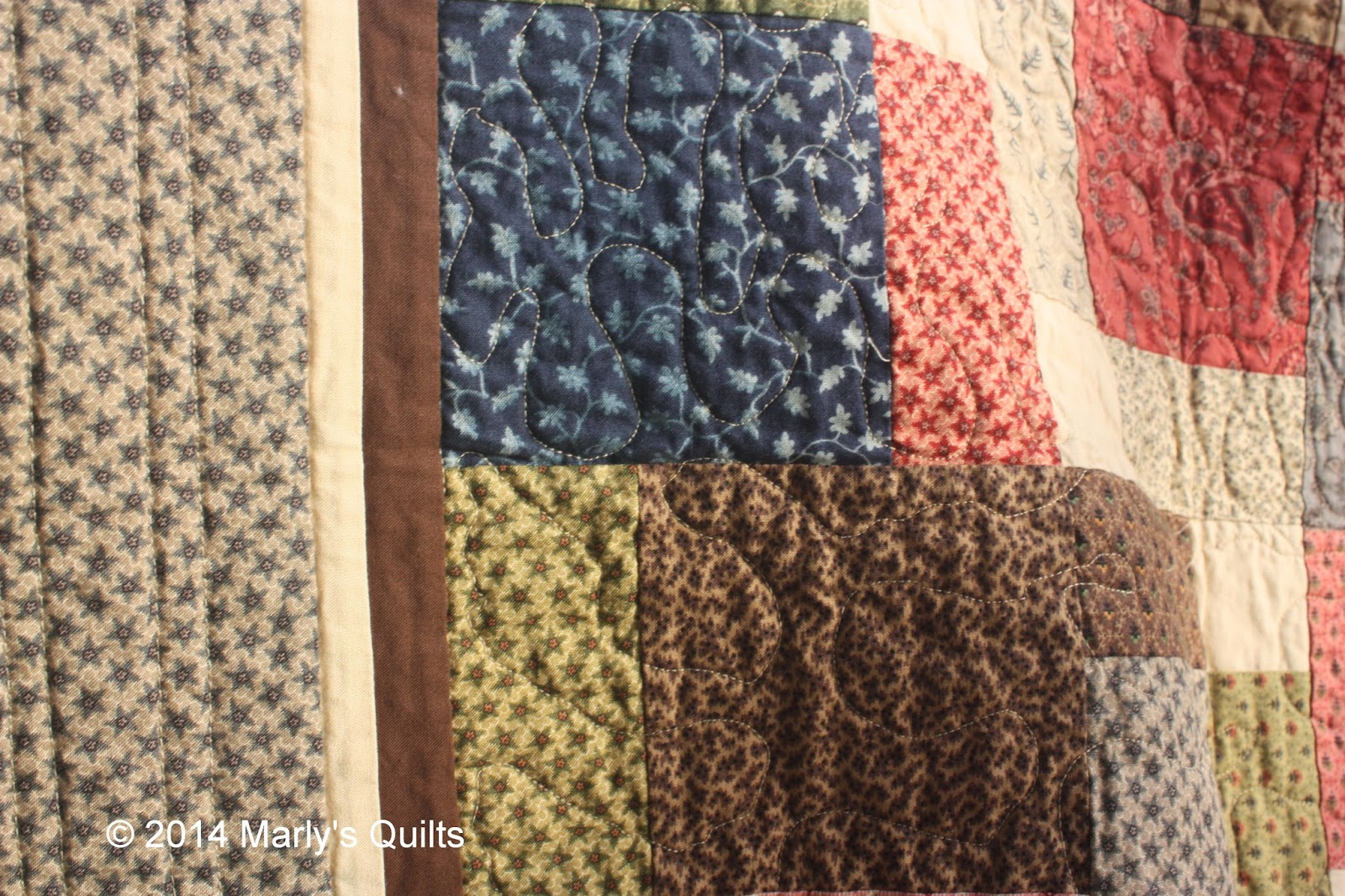 As far as possible I reserved the charms with large prints for the outer corners of the nine-patch (they're the ones that don't get cut), and used the small and medium prints in the sides of the nine patch (they get cut once through the middle) Unfortunately, as seen in the photo above, there were fewer large print squares than needed.

Sewing, cutting, sewing again went according to plan, and in the greatest secrecy, but not as quickly as I'd hoped because life got in the way! Finally in the middle of July, just BEFORE my second carpal tunnel operation, I managed to get it quilted. Managed, but I don't know how; I had to stop every 5 minutes because the pain was too much. Then followed a pause of a month for the operation and recuperation until my wrist had recovered enough to sew the binding. 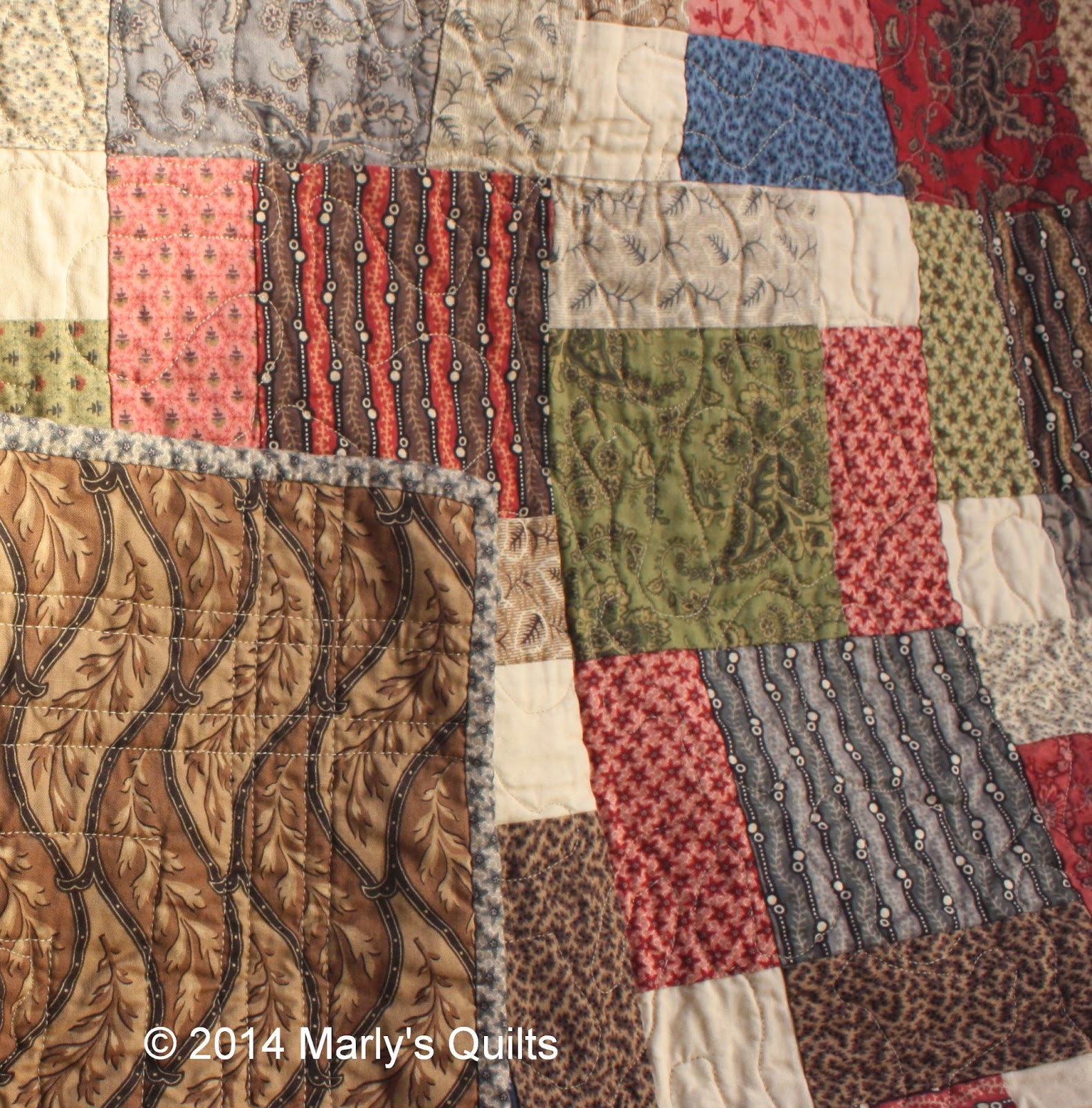 By then I was feeling as fit as a fiddle, and could take anything on, but the weather intervened. While the average summer temperature here is probably about 22ºC I found myself sitting in my shorts on the balcony with a quilt on my lap in temperatures of 35ºC - just 1ºC less than normal body temperature! - while I hand sewed the binding. 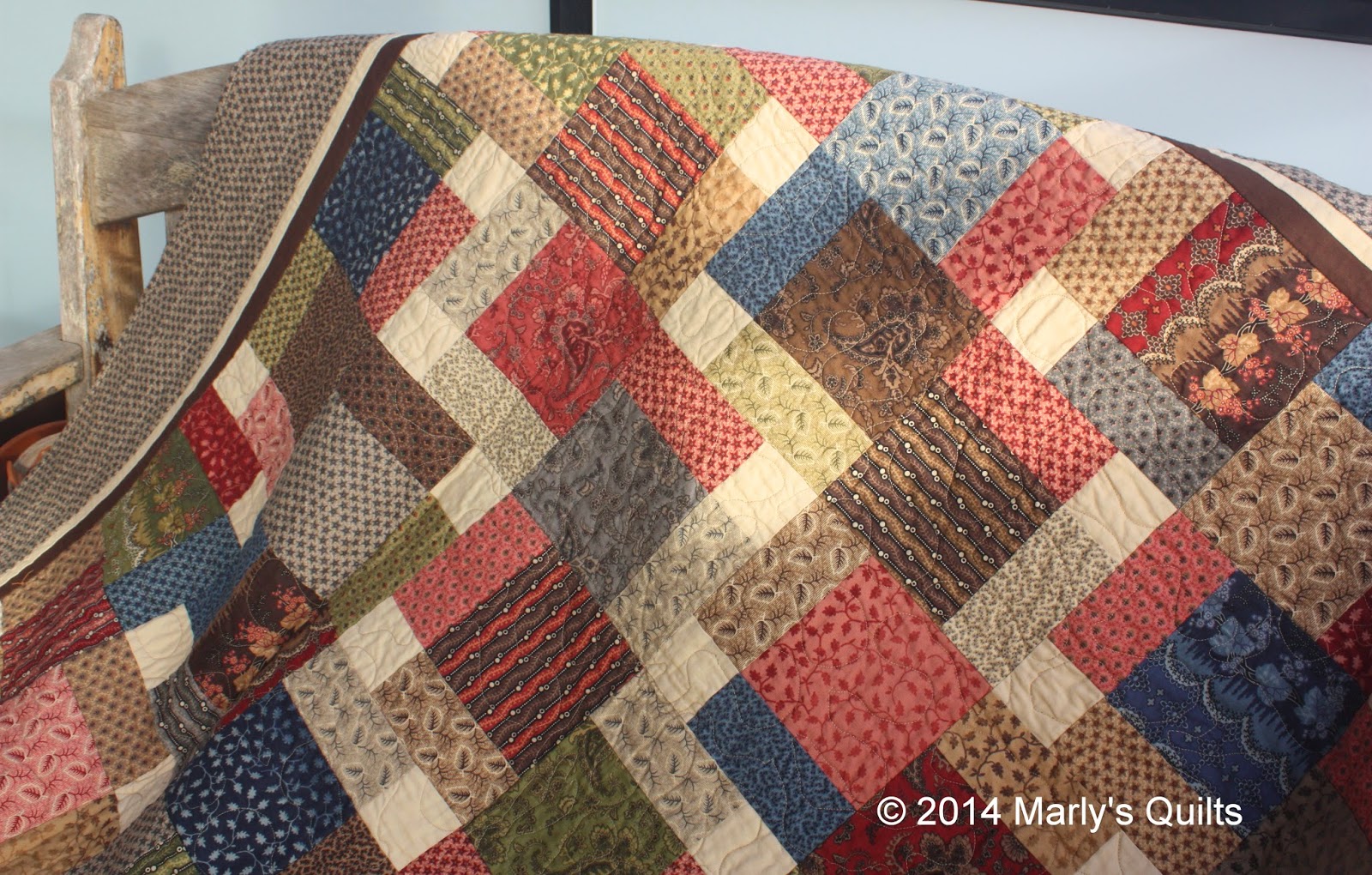 Definitely not the ideal conditions. But the deadline of the middle of August was fast approaching.

Remember I said something above about the greatest secrecy? That was not easy when the temperatures were so high, as my husband was working a "tropical timetable" - starting a 05:30  or 06:00 and finishing at ??? - sometimes 12 noon, or 13:00. Several times I bundled the whole quilt into a box and shoved it into the bottom of a cupboard when I heard his key in the latch!

Finally it was completed with a couple of days to spare, after being in the make for six months. I named it "Hop-Scotch" because the pattern made by the light squares reminds me of a game of that name I played as a child: hopping from square to square in a grid drawn on paving stones. The quilt was well received: he doesn't know the game hop-Scotch, but he knows Scotch!

Congratulations for reading this far! If you're interested in making a Disappearing nine-patch click the link to the Missouri Star QC above and for more lap quilt inspiration hop over to Val's:

The last of the "Little Letters"

Having made all the letters as far as "R" several weeks ago, I worked through the rest of the alphabet on Saturday morning.


The quilt pattern from The Temecula Quilt Company QAL has four more blocks to make up the 26 letters to a 5 x 6 block layout. I still have to make those and add the sashings, so there's some way to go still.


The letters are really very easy to make, and the great thing is the patterns are staying up on the site, so if you're interested in using them too go and take a look.


Linking up this week to:

Finished in time for Christmas! 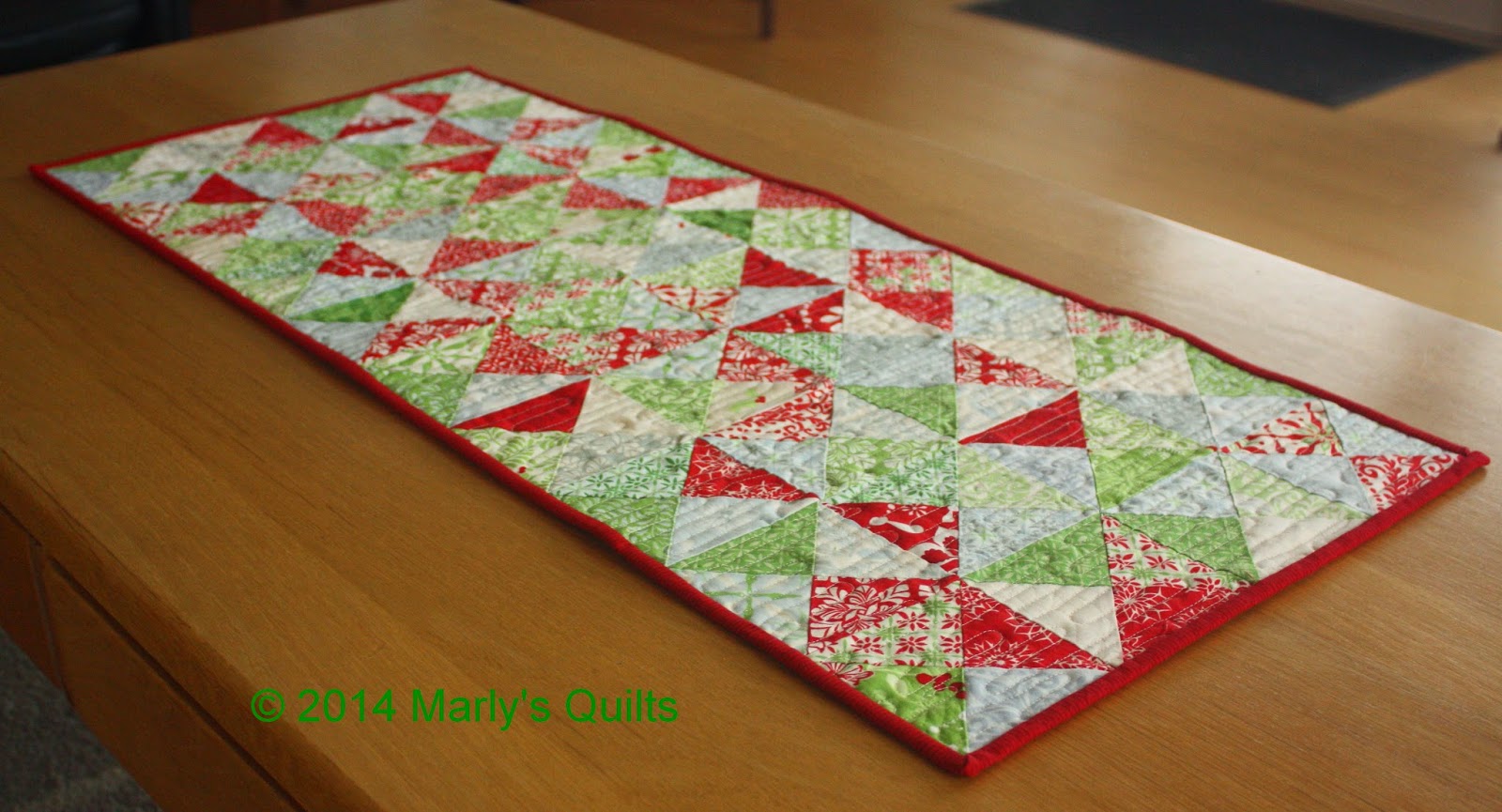 finished yesterday evening. I was hoping to be finished sooner, but my real job has been very demanding over the last month, leaving me too tired to pick up a needle, and that's tired!

Fabric: body: Solstice by Kate Spain for Moda (one charm pack);
binding: fabric of unknown title by www.stof.dk for MCS (?)
Pattern: my own, but I'm indebted to Amy Smart (Diary of a Quilter) for her Hourglass block tutorial
Thread: Aurifil 40 off-white (2309) for both piecing and quilting and red (2250) for binding.
Wadding: standard cotton wadding sold by LQS
Backing: Off-white Bella Solid 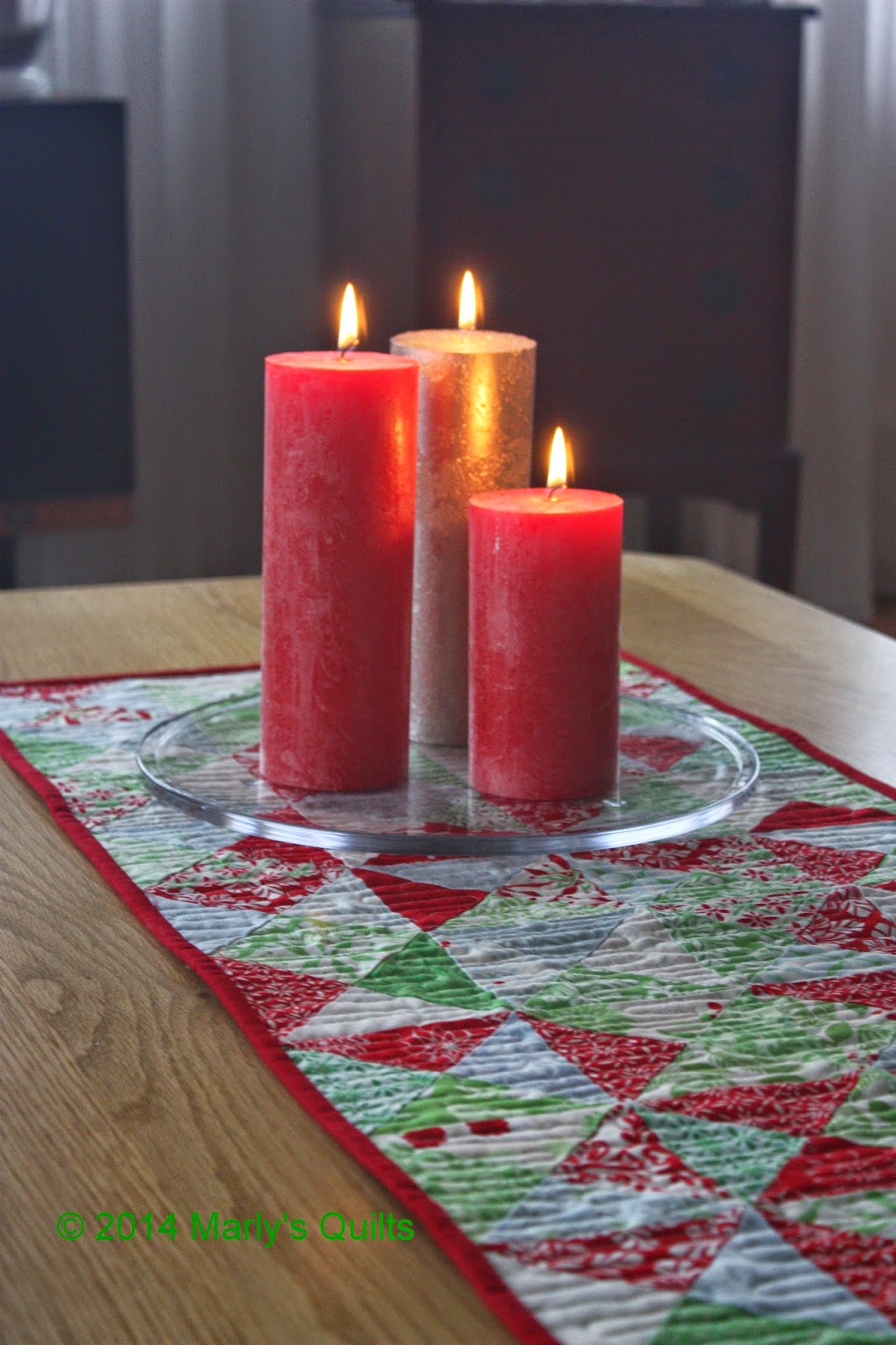 Having had a bad experience trying to quilt this with variegated thread a few weeks ago (see here), I returned to it this week and did some simple squiggles with a neutral coloured thread. I think this is a much better result, and I shall be keeping variegated thread to use on solid fabric. 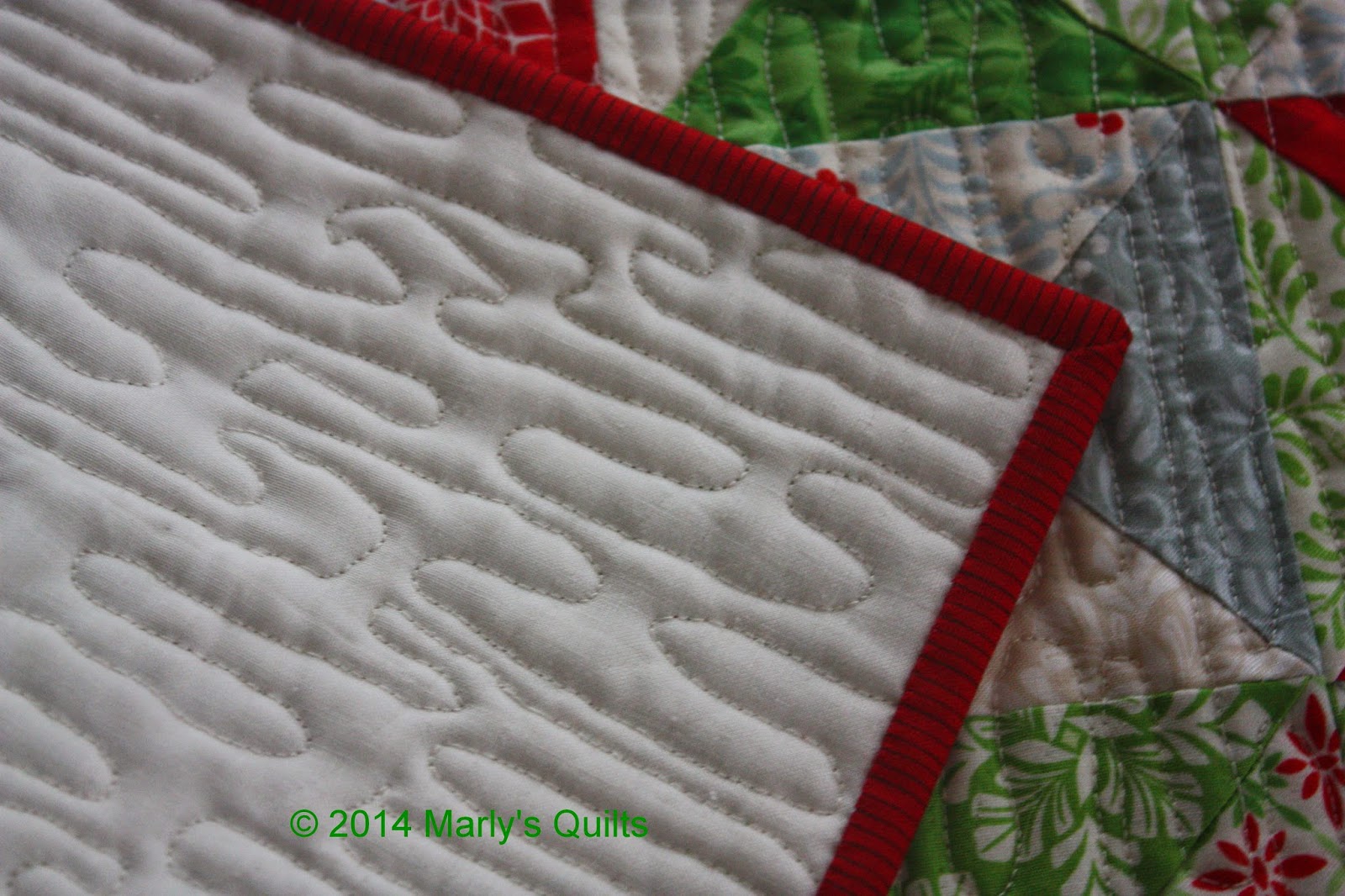 I love the fabric I used for the binding so much, I'm off to the quilt shop on Tuesday to buy more. I love using stripes in a binding. I'm sorry I can't give the fabric name; there isn't much selvedge on 25cm of fabric.

Linking up this week to: