At the beginning of March I set trying to finish this quilt as my goal: 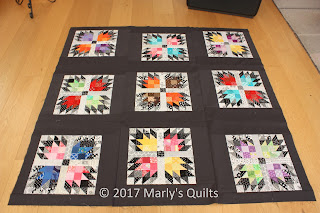 (and, incidentally at the beginning of February too!) Unfortunately it's still not quite finished. I don't know what happened to March, except that it quick marched all the way and April starts in seven and a half hours!

The picture below doesn't look very different, but appearances can be deceptive.


The difference is in the detail: 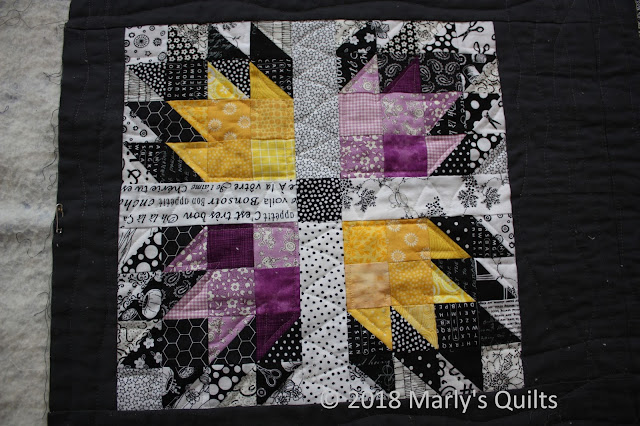 All the rainbow blocks are now quilted, the label is attached (nearly forgot it!). The extra wadding and backing could now be removed and the quilt bound but I can't find the last piece of dark grey fabric to make the binding! If I find it, I'll try to finish it tomorrow evening, and otherwise it will have to wait until later in the week as the LQS is closed until Wednesday.

Guess what's going to be first on my list for April!

Click on the button to visit more finished projects, really finished, that is!

Angela chose green as this month's colour for the RSC. I showed my Squared Away and my wonky star block earlier but here are some paper-pieced blocks: 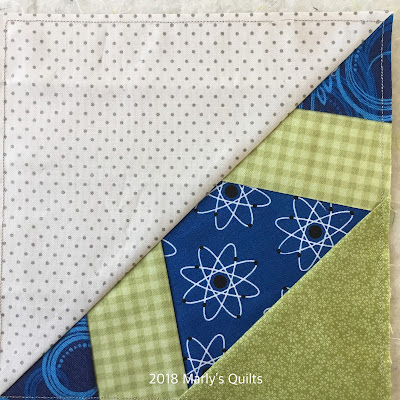 I have been making FPP blocks for the "Year of Scrappy Triangles" and incorporating green into most I've made this month. 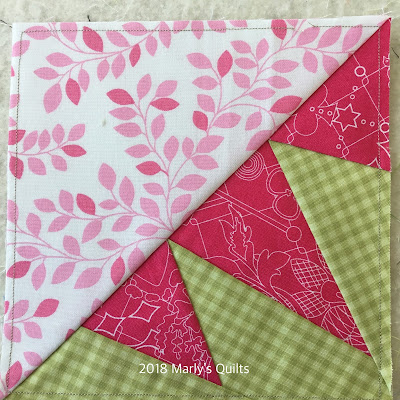 I think these three are my favourites from this month's haul. 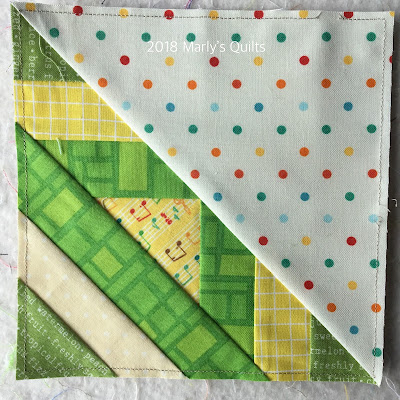 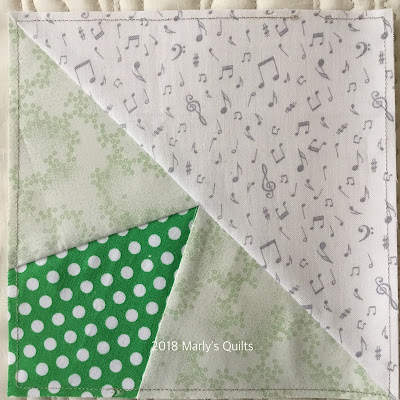 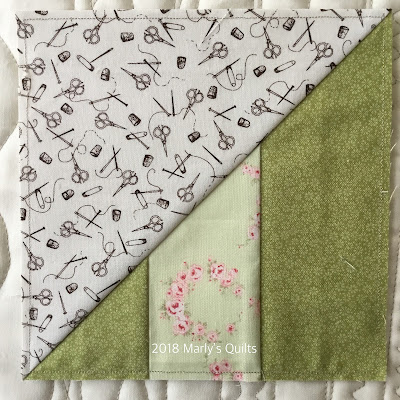 For anyone who hesitates to do Foundation Paper Piecing I can highly recommend Leila's tutorial.

I really disliked the frustration that occurred whenever I tried FPP.

Would you believe I used to trim after I had sewn, and as often as not trimmed so much off the newly added piece it was no longer big enough. What a dunce! I have to chant, like a mantra: 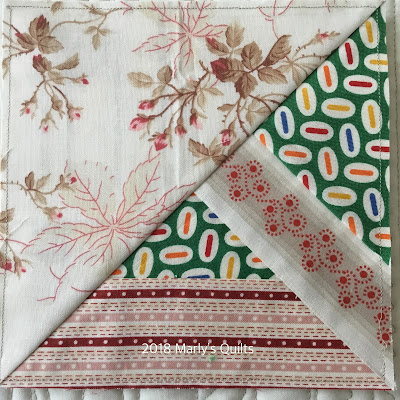 and then they turn out well.  Some are prettier than others! but all are very good practice.

If you click on the button you will find more lovely scrappy green patchwork.

And now back to quilting my 2016 rainbow quilt.

Squared Away in green


For March Angela chose green for the Rainbow Scrap Challenge and Mari chose a second Red Cross block for the Squared Away sampler. We made a different Red Cross block in January. 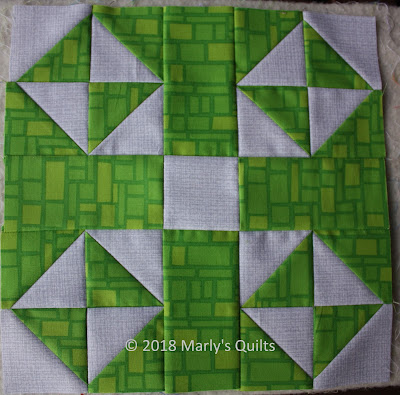 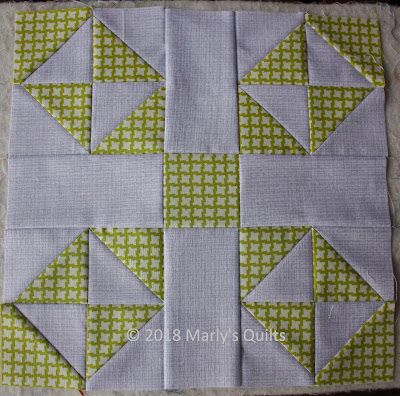 The recommendation is to make three blocks each month, but I decided to just make two finishing at 10" each, which will give me twenty blocks: a nice four by five block setting, large enough for a throw.

As I had so much to say last week about our freak weather, here's an update! The wind changed direction and the temperature rose 20ºC within two days: we're back to normal! Thank goodness!

Click on the button to see more green patchwork.

Email ThisBlogThis!Share to TwitterShare to FacebookShare to Pinterest
Labels: green, RSC 18, Squared Away

As a child I hated spring greens! They were the thinnings from the rows of cabbage, spinach and broccoli seedlings and goodness knows what else besides. My father hated waste so after meticulous washing to remove soil, into the pan they went. A couple of minutes later they landed on our plates, an extremely strong flavoured sloppy dark green mess. Yuck! No waste, remember, especially not on plates!

As the colour for the RSC this month Angela has chosen light and medium green, to remind us that spring is on its way.

A nice thought Angela, especially as we had our first snowfall of the winter (all of 5mm!) last night. I need to explain (but you don't have to read; skip the rest of this paragraph if you're not interested in freak European weather!) that in a cool temperate climate snow rarely falls in flat coastal areas where the prevailing winds are warm. It just rains! For the last ten days we have been treated to north-easterly force 8 winds from Siberia bringing, for us, excessively low temperatures but dry and sunny; if it hadn't been for the force 8 part the weather would have been pleasant. These same polar winds, having frozen our socks off then crossed the North Sea, picking up moisture as they went, and dumping it on the UK which has had its heaviest snowfall ever! Last night the Westerlies blew it back, so we got a light powdering of the white stuff. Now its melting. The ground is still frozen, so it's not over yet!

OK, back to light to medium green: 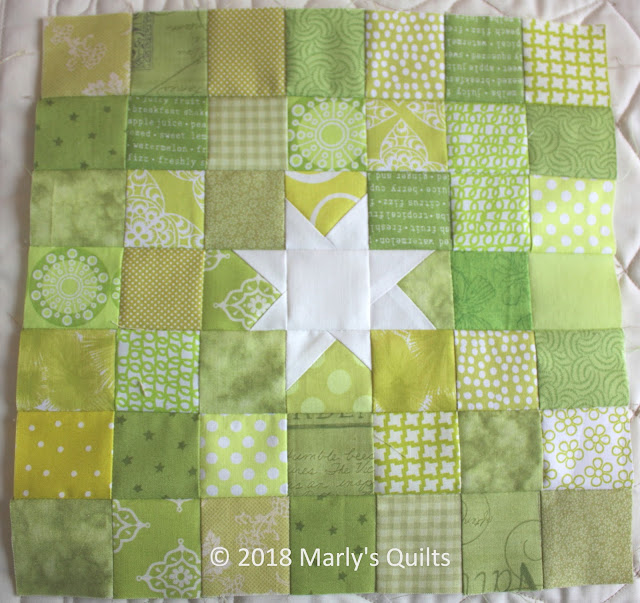 I've been joining same colour 2" squares as Leaders & Enders. Yesterday I was sorting through the box of twosies (force 8 and -8 degrees C - not going anywhere!) and found I had nearly enough yellow/green to make a 49-patch. Quite a coincidence as I hadn't seen Angela's post then. So here we are: one green block already made! I've never been so quick off the mark!

Now to start cutting for Squared Away. Mari has already posted the instructions.

Click on the button to join the RSC party.

One Monthly Goal for March

My goal for March is the same as my goal for February! To finish this quilt:

In February I only managed to buy fabric for the back, piece the back, layer the whole thing and quilt the wide "sashings"  between the blocks. It seems like next to nothing, but it took me all month. OK, I got sidetracked by the "Year of Scrappy Triangles", had the 'flu' for a week, did a bit of paid work, and made a couple of RSC18 sampler blocks. I managed to avoid housework pretty effectively.

For March there's relatively little left to do: quilt the blocks, starting with this one: 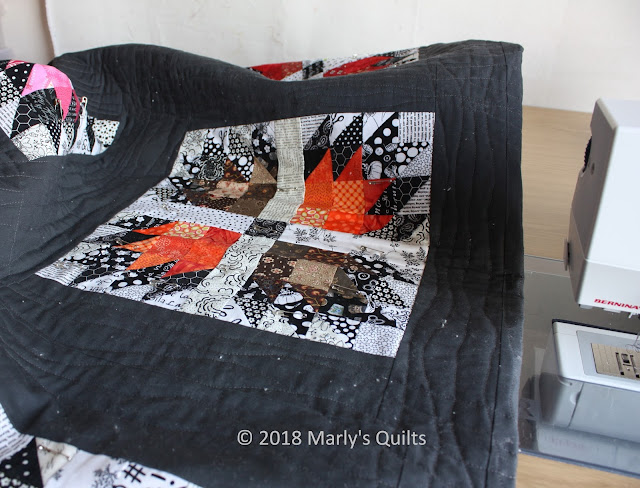 Then quilt the label, make a binding and bind the quilt. Put that way it'll be done in half a day!  Not really! Binding by hand will keep me occupied for at least two evenings. Not to forget burying the threads ...

If I get this finished I'll resurrect En Provence :

which has been boxed for nearly a year. The backing is partly pieced; I'm not sure how much, but I shall be very happy if this is layered by the end of March.