This is my first finish for: 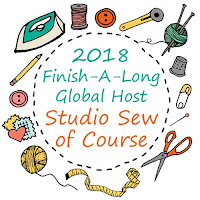 This blog has always been about quilting which isn't surprising when you consider the name. One or two side steps into embroidery have occurred, but then in relation to crazy quilting. There we go again ... quilting!

But this post is about knitting. Now I'm knitting again. I stopped about six years ago when the cardigan I was knitting showed signs of being too wide in the shoulders and too tight in the waist! That really is a downer and garment knitting was clearly no longer for me! Then carpal tunnel syndrome made knitting impossible.

I do, however have a lot of wool left over from projects long since worn out and was thrilled to see a pattern offered through Ravelry on Instagram. Never one for an endless row of knitted tea-cosies, odd socks, multi-coloured scarves etc. I was immediately struck by the Memory Keeper's Shawl designed by @linaknits.

Although I've been knitting on and off for more than sixty years, there were several "new to me" things about this pattern. 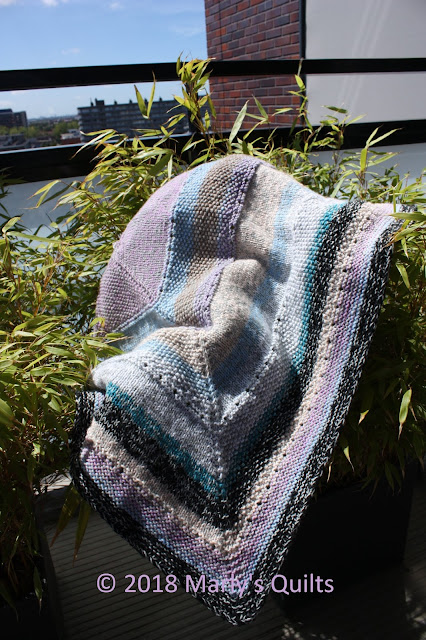 Firstly it's knitted throughout with two yarns simultaneously: a neutral which is constant throughout, and lots of scraps of varying colours, but of the same thickness - in my case, more or less, as most of the balls had lost their labels! The neutral yarn (I used a light grey) gives more subtle colouring while using up scraps.

Second "new to me" was knitting on a circular needle. 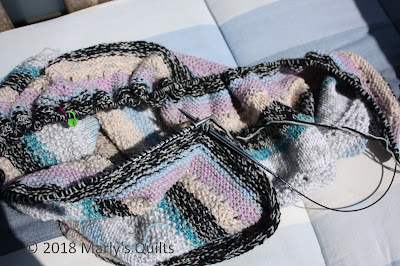 It's not knitted in the round, just backwards and forwards like on conventional needles. But with some 360 stitches in the last row the mind boggles at what would happen at the end of the row with all the stitches on the same needle. After some unfruitful local searching I finally bought a 120cm long circular needle online. 120cm seems to be the longest there is, although this one can be extended by adding other sections of cable. As it was 120 cm was more than long enough.

Thirdly, I'd never heard of an i-cord before. 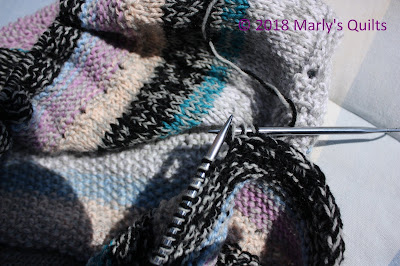 And now I've knitted one! It forms a more stable edge to the piece, and especially the cast-off i-cord gives a stable yet flexible finish. It can be seen in the photo above; the three stitches on the right hand needle get slipped back onto the left and then knitted again: K2, K2tog, thus taking up the next stitch from the left hand needle. It took ages to cast off 360-odd stitches that way but I'm really satisfied with the result.

One last photo! Today's bright sunshine and shadows are making the colours look rather pale. The first photo (draped over the bamboo) is a better representation of reality. 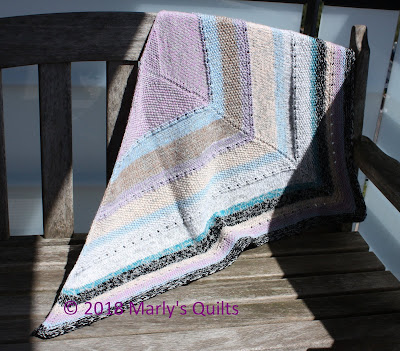 Click on the button to see more "new" techniques.

My monthly goal for July was to quilt and bind this ill-fated quilt. this was also my second goal for the Finish Along Q3.

It wasn't finished in May, as I'd hoped, nor in June, because the machine spent most of the time with the dealer. 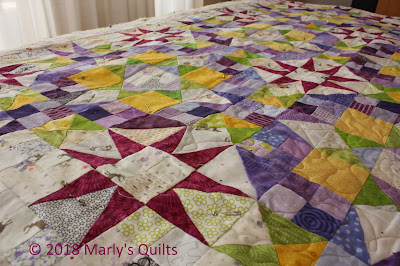 The Bernina Stitch Regulator (BSR) is now working as it should, but somewhat temperamentally. It's weak spot is definitely the plug with which it is attached to the machine, requiring additional care and attention. Anyway, at the eleventh hour I have succeeded in getting it quilted and bound! 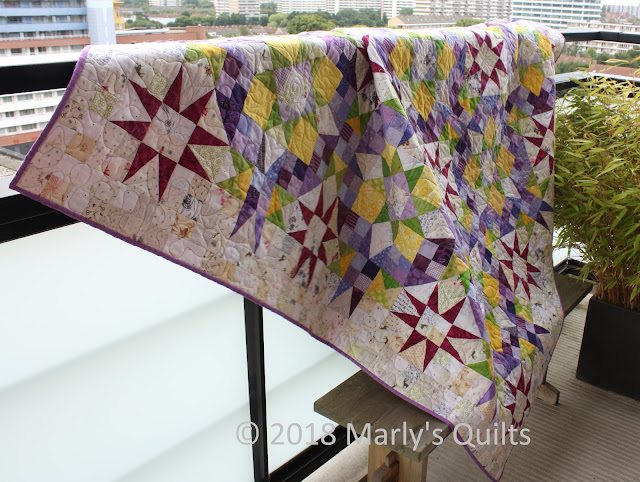 I quilted mostly with a large meander, except for the elongated magenta stars which all have the same quilting motif, and the blocks with yellow squares which all have a spiral in the centre surrounded by spiky petals inspired by sunflowers. 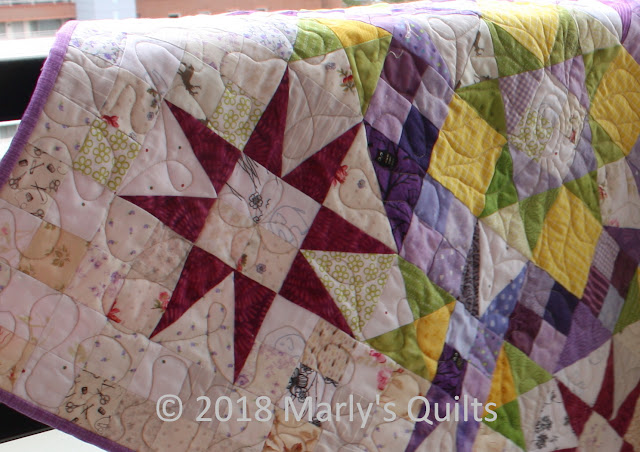 I still have to  bury the threads, and there are an awful lot of them from when the BSR developed a mind of its own and was running on the spot! I'll do that this evening - technically still July.


The top is made of scraps from my stash and the backing is a Bernatex basic weave, with a row of blocks made from pieces of the top that weren't used. 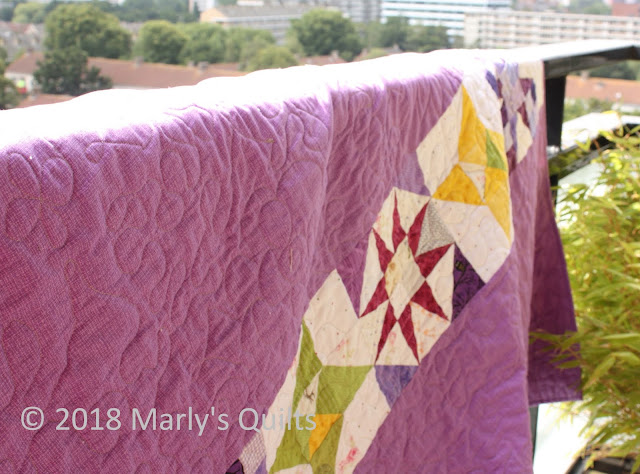 One last view. I'm always amazed at how Bonnie Hunter's mystery quilts come together and all the secondary elements that then become visible. 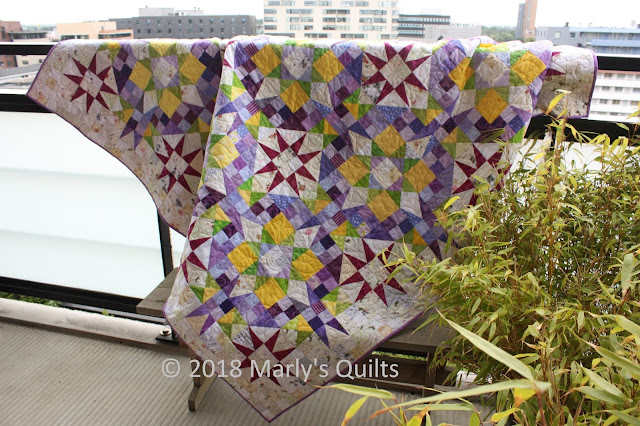 
Each month Angela choses a colour and this year Mari is posting a block for the Squared Away sampler.
This month's colour is red and here are my two Round the Corner blocks: 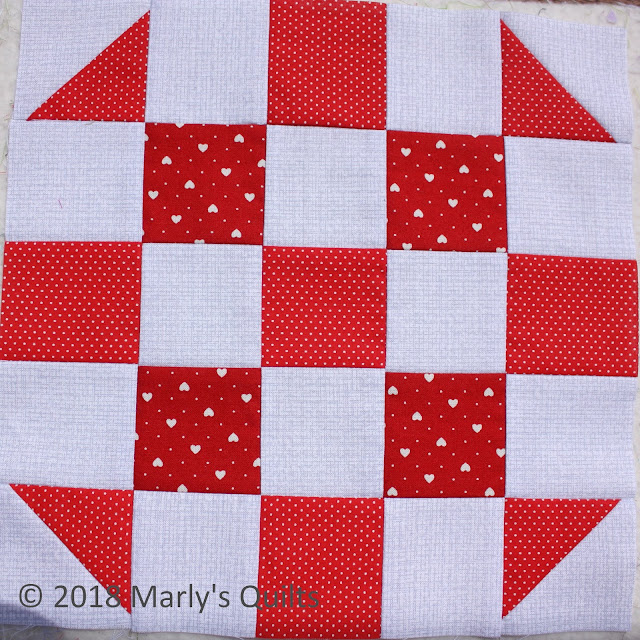 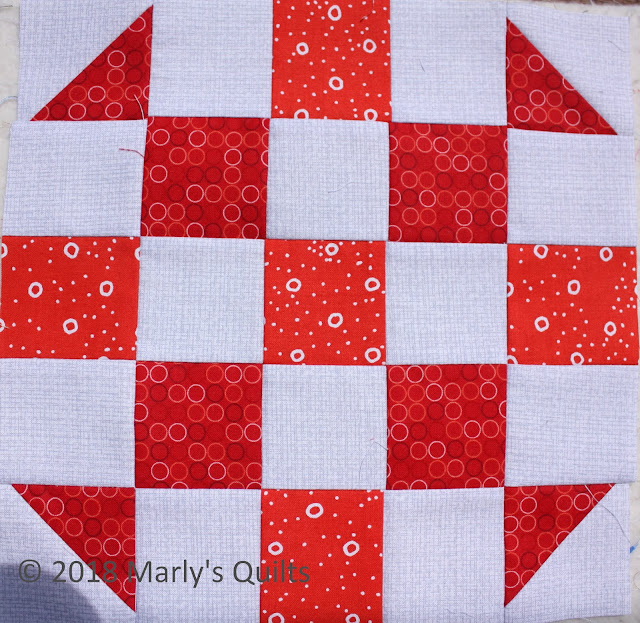 I was in Friesland (one of the most northerly provinces of The Netherlands) last week, and stayed in Leeuwarden,  the provincial capital which has been chosen as Cultural Capital of Europe for 2018. To celebrate this honour the provincial governors decided to invite eleven sculptors to create a fountain for each of eleven towns in the province. A suitable cultural expression considering the importance of water in out lives.

I photographed the fountains in Bolswaard:

Hold on - a fountain? There's no water!

This country, The Netherlands, is normally wet. In fact historically our greatest struggle has been managing the water. Just think of all those windmills pumping the water off the land from the network of drainage ditches into the rivers, and all those levees keeping the rivers within boundaries and keeping out the sea.

Uncharacteristically no rain has fallen in the last six weeks, leading to depleted water supplies. In some areas, including Friesland, a water shortage has officially been declared; fortunately there is no restriction yet for households, but farmers are no longer allowed to pump up ground water, and town councils have advised that fountains should be still, and garden hoses go unused. Any other year and Friesland's fountain project would have been spectacular. As it is the sculpture is interesting, beautiful, moving and in some cases controversial, but in some cities misses its crowning glory.
You can't plan everything!

I never thought I'd say this, but I wish it would rain! Just a little, and at night!

Click on the button to see more scrappy redness.

Email ThisBlogThis!Share to TwitterShare to FacebookShare to Pinterest
Labels: red, RSC18, Squared Away, The Netherlands

I didn't finish anything in the second quarter, mainly because my sewing machine was out of commission from the beginning of May until the middle of June.

So here is my list for the third quarter:
Only three proposed finishes; all my other projects are BOMs etc, and not scheduled to be finished before the end of the year.

I wish everyone a productive quarter. Mine can't be any worse than the last! 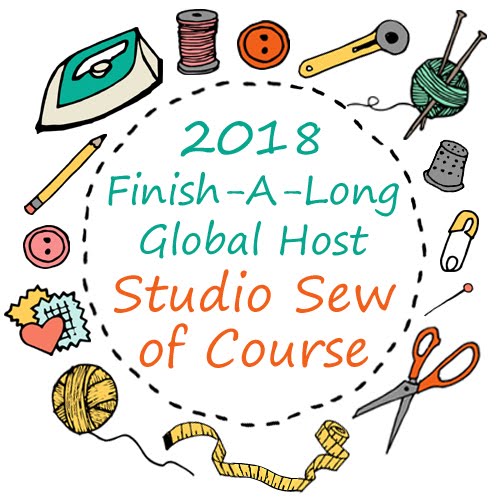 Click on the button above to see more proposed finishes.

This is beginning to get tedious, but my goal for July is the same as for May! 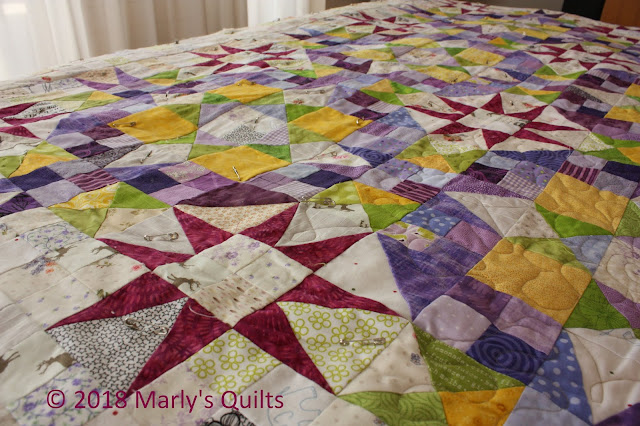 To finish my version of Bonnie Hunter's 2016-17 Mystery Quilt, "En Provence" which I had to stop quilting during the second week of May because my machine was playing up! Since then it's been back to the dealer twice, and I've been on holiday. 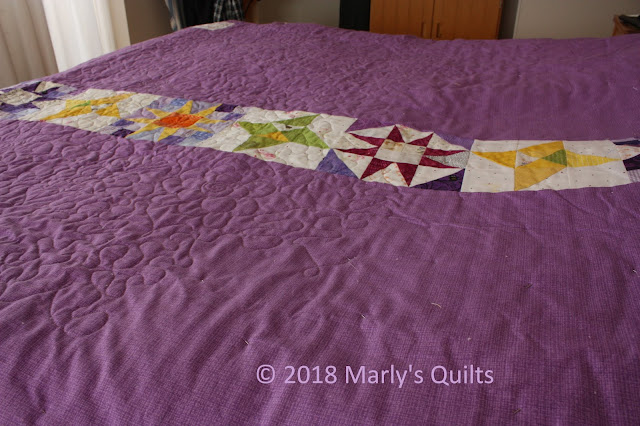 My machine is now back from the dealer who replaced the BSR section of the machine's wiring. The fault has been ascertained: the wiring in the BSR foot itself. We are now trying to convince Bernina that it was faulty within the guarantee period, even though their technician failed to find anything 2 years after purchase. Rewiring the foot is impossible so the choice is: buy a new one (about €600.-) or learn to quilt with the darning foot (like thousands of others.) The dealer gave me some hints about positioning the BSR plug to give the fewest problems, but I still have to try it.

just click on the button to see more July goals from other quilters.