Angela chose the colour yellow for June, and put up a number of sampler blocks. This week I made three, and as far as I know I'm up to date on yellow.

Here are my three yellow blocks:

I'm really pleased with the Economy block which had always frightened me somewhat because of the complex maths (Pythagoras and all that jazz).

Last week Angela posted a link to a chart with the calculations for triangle sizes, and gave her own rounded up sizes. However I recently downloaded a free app for my iPhone called "QuiltingCalc: The Quilter's Little Helper" (for iPhone or Android) from Robert Kaufman Fabrics, which calculates the sizes for you. I used this, although it was necessary to calculate in two stages: firstly the triangles to make the outside square, and then the triangles for the middle square. In other words you calculate from the outside inwards, which is what we always do anyway!

This app not only helps in calculating economy block sizes, but also backing and binding. If you have a smartphone or tablet, I would recommend you take a look. It's free!

I think I would like to mark the halfway point in this year by taking a photo of all my RSC blocks so far and posting it next week. Does that seem like a good idea for everyone? As we still have a couple of June days left we might still be making yellow blocks over this weekend, or we can use the next week to catch up generally.


I'm linking up with:

Week 25: one yellow, one green, and some Celtic sunshine.

No, I haven't been to the lands of the Celts this week. Not in person anyway, just in my memory. More later.

In June the colour for the Rainbow Scrap Challenge is yellow, and this week I've made one yellow block:


Aren't those dancing elephants sweet? It was a block in a charm pack and I think the chance of my making a baby quilt any time soon is extremely remote, so no problem cutting it in half. So as the elephants were dancing I gave them some music to dance to! It's a catchy tune, too, although I don't think I'd heard it before. It's definitely not "Nellie the elephant"!

And one green block:

which I had somehow missed when Angela posted the pattern. Actually I found a lot more patterns for green blocks I'd missed. My reading is slipping!

Not much rainbow sewing this week because having corrected and added the borders at the beginning of this week, I've been quilting this:

On the subject of Celtic Solstice: this was the reason for my starting to blog last December. I'd forgotten; so much happens in six months in Blogland. But yesterday I saw Val's anniversary post where she asks people to link their first blog posts. You can see mine here, although in December there was just the message and the photos. I still had a lot to discover (and still have). Go to Val's Quilting Studio, have a look there and join in the linky party. It's interesting to see how people's styles have changed since they first blogged. Anyway I started blogging so I could join the link up for Bonnie Hunter's mystery quilt, about six months after discovering that there were quilters with blogs! And since then I've spent too much time reading blogs, so that quilt still isn't finished!

so head over there too, and see what's going on!

The RSC colour for June is yellow. I managed to make 4 blocks this week.

For the Alamo Star I got to use the Tri Recs rulers I had bought to make the other project I was working on this week: Celtic Solstice, which was Bonnie Hunter's mystery quilt last December. This quilt has three borders, the middle of which is pieced with the same triangle in square units as in the Alamo Star.

Wednesday I went shopping for wadding and fabric for the plain borders in the morning and got the inner border cut and attached and the middle border pieces assembled in the afternoon and evening.  Funny (ha ha!! NOT) thing: why are all the middle border pieces 3" shorter than the inner border? As I've only made one quilt with three borders, and for that didn't have a pattern, I thought there was maybe some quilting secret plan (like nesting seams) that called for a shorter border. Mind you 3" is rather a lot to ease in to fit. I needed the whole of Thursday to get them all on: all 3" short and NO pleats in the inner border (a few gathers but once quilted they will hopefully disappear, I thought.) 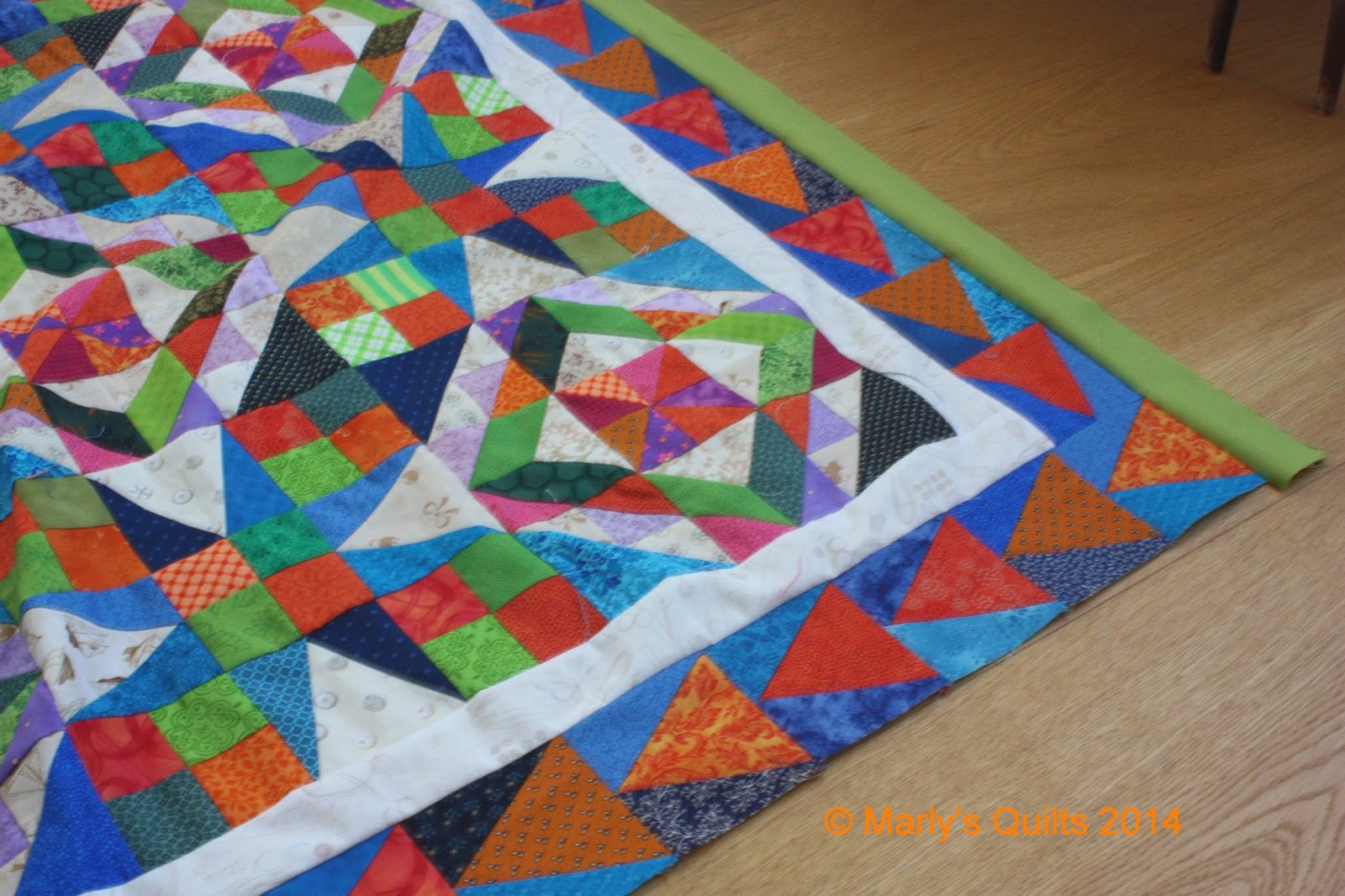 Friday morning I got the two side pieces of the outer border on: doesn't look too bad, does it?
(that's because I smoothed it for the photo)

But all is not well. Never mind a Celtic Solstice, this looks like an Atlantic Gale. 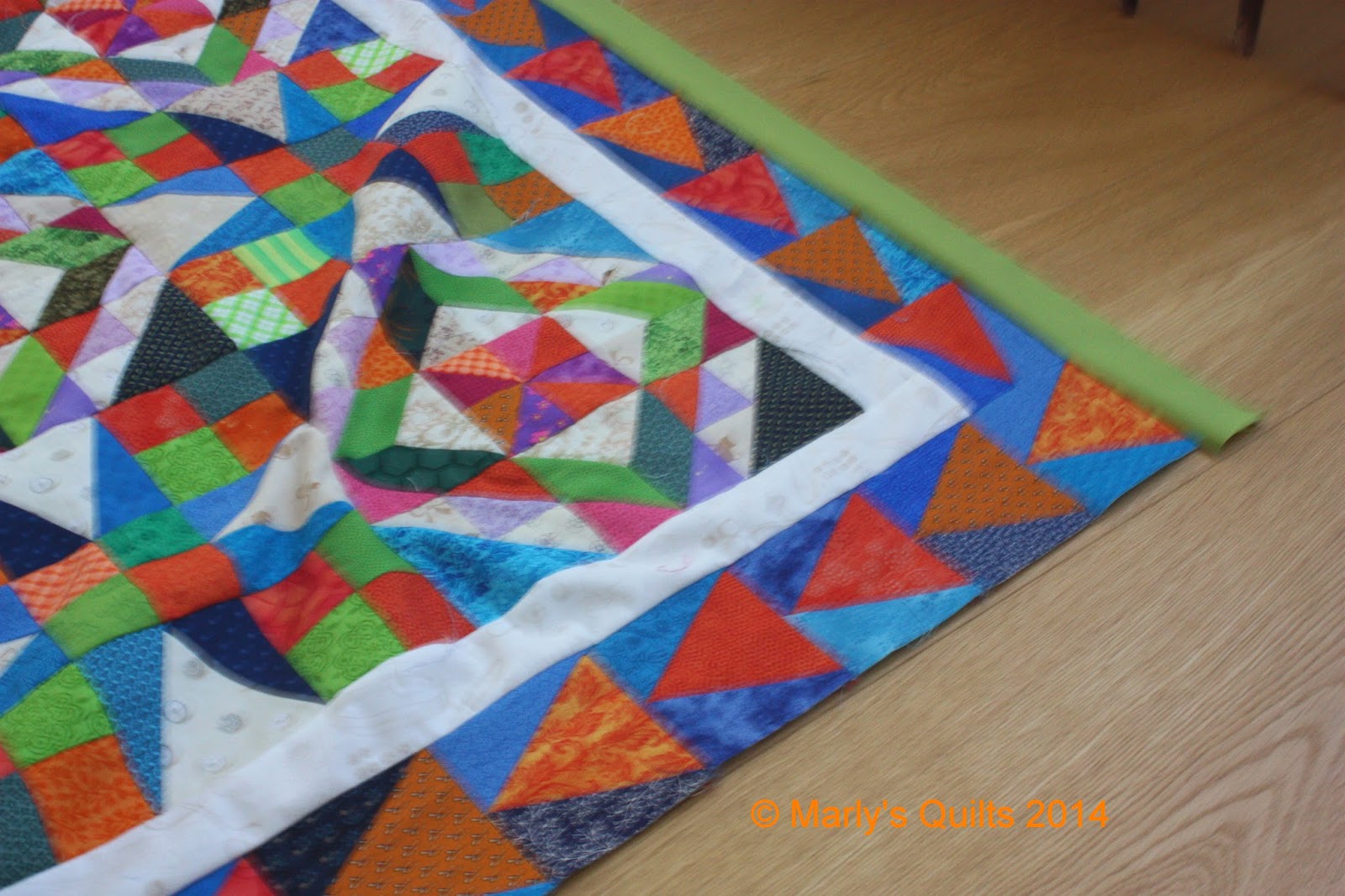 It will seriously NOT LIE FLAT, and not just the inner border: the whole thing.

Of course not, I can hear you saying across the miles, stupid. Only at this point did it cross my mind that there might, just might, be a mistake in the pattern? Wading through all Bonnie Hunter's posts for January, and she does write a lot, I finally found a post where she gave the correct number of pieces for the second border: 22 units for the sides and 24 for the top and bottom. I was away from my computer in the first two weeks of January so missed it. Of course, everyone else deduced for themselves that there was a mistake, especially when there were 4 units left over! Just me, 6 months later, following a print out of the original 1 January post, tried to fit 62" onto 65"! Only one thing for it:

To date I've undone about one quarter, better get back to the frog song!

so hop over there to see what other quilters have made this week.

The RSC colour for May was green.
I made two more green blocks last Saturday, after I posted . I don't remember which they were, but here are all my green blocks: 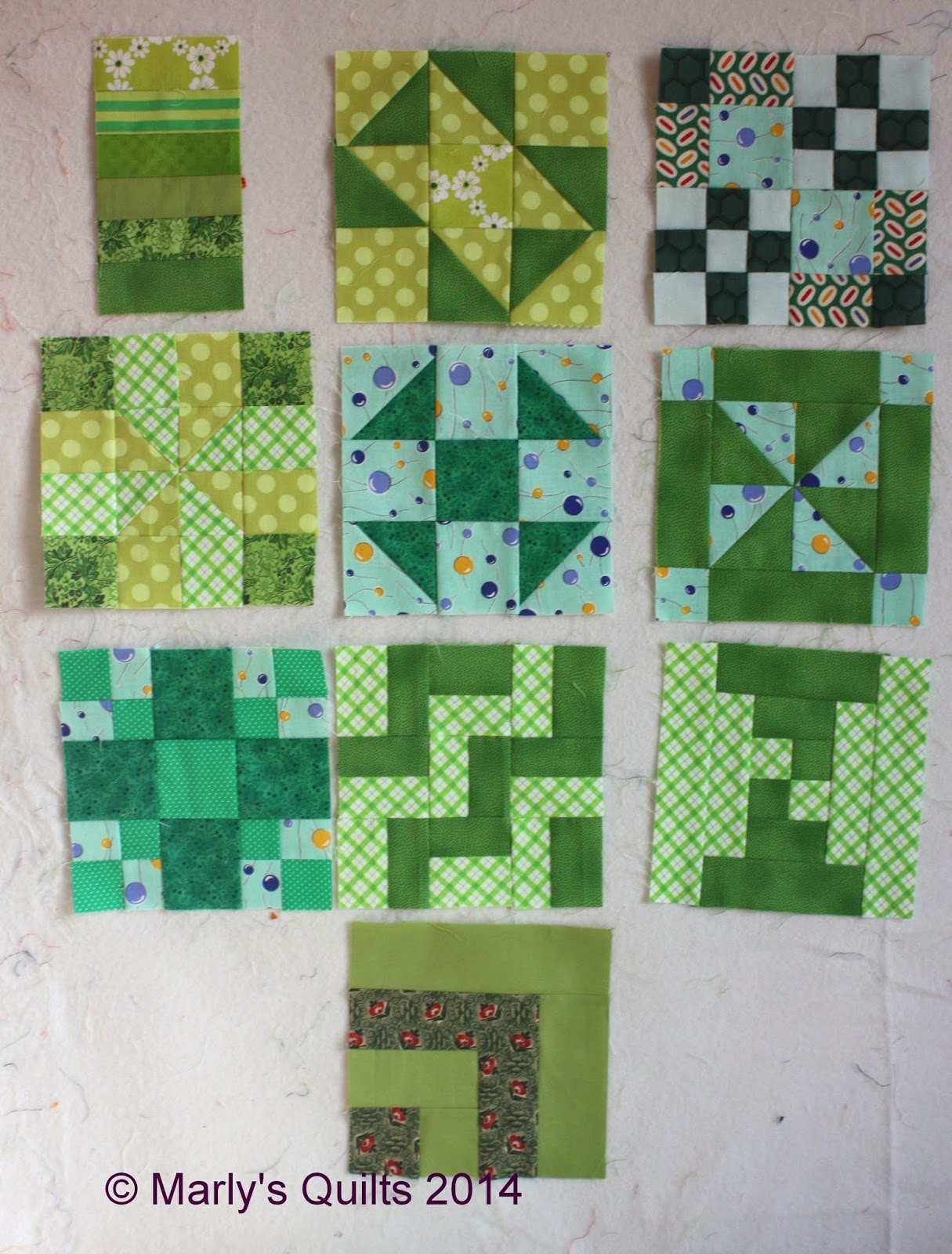 and the one yellow block I got done this week. 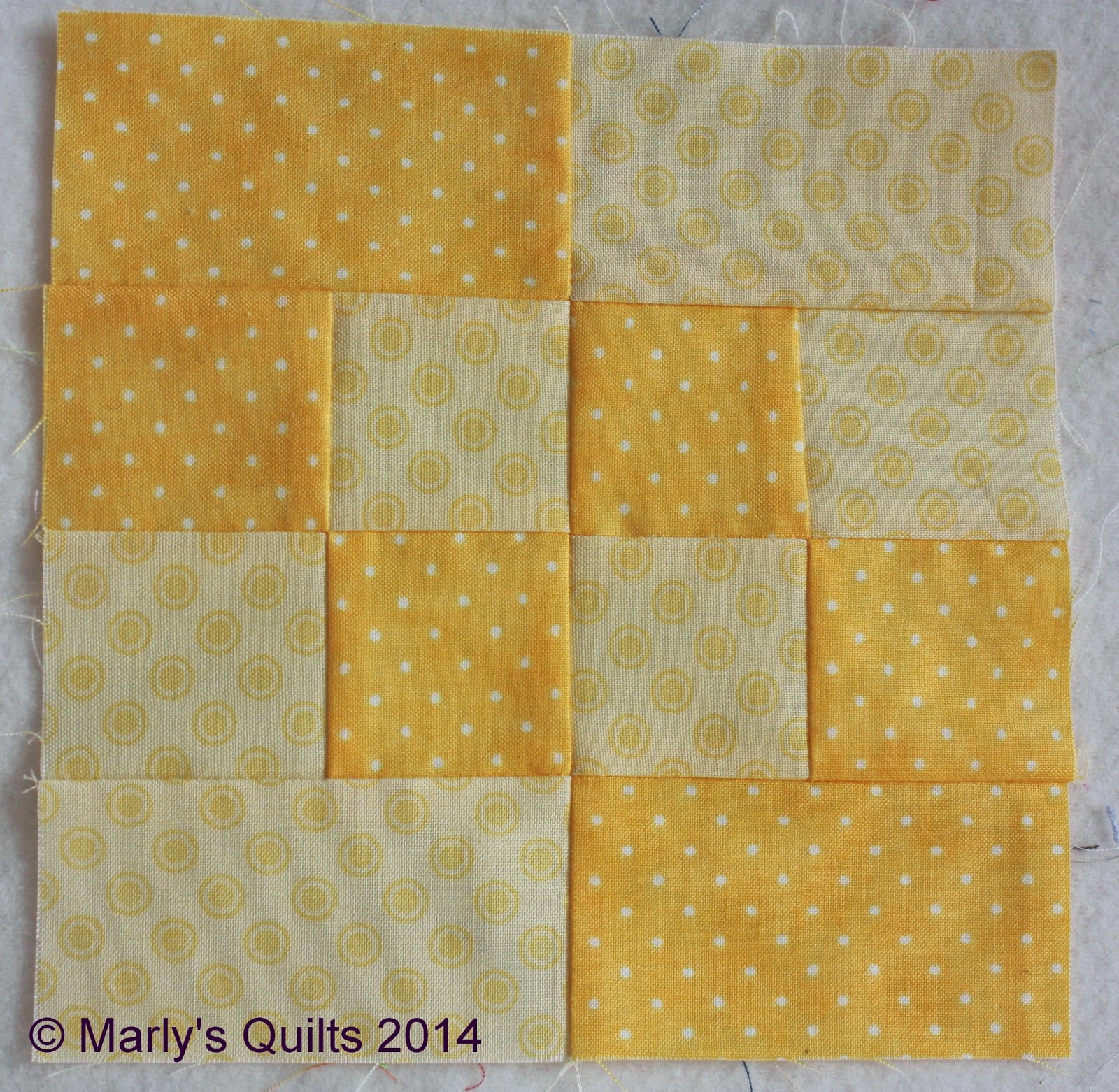 For the rest I had a lot of hand sewing to do this week.

so click on the button to pop over there to see what else has been going on.

I joined the Finish Along at The Littlest Thistle for the second quarter in 2014 and my list of projected finishes is here. This is my second finish.

In this quilt I finally beat the HST. Half Square Triangles had to be accurate; no fudging possible! 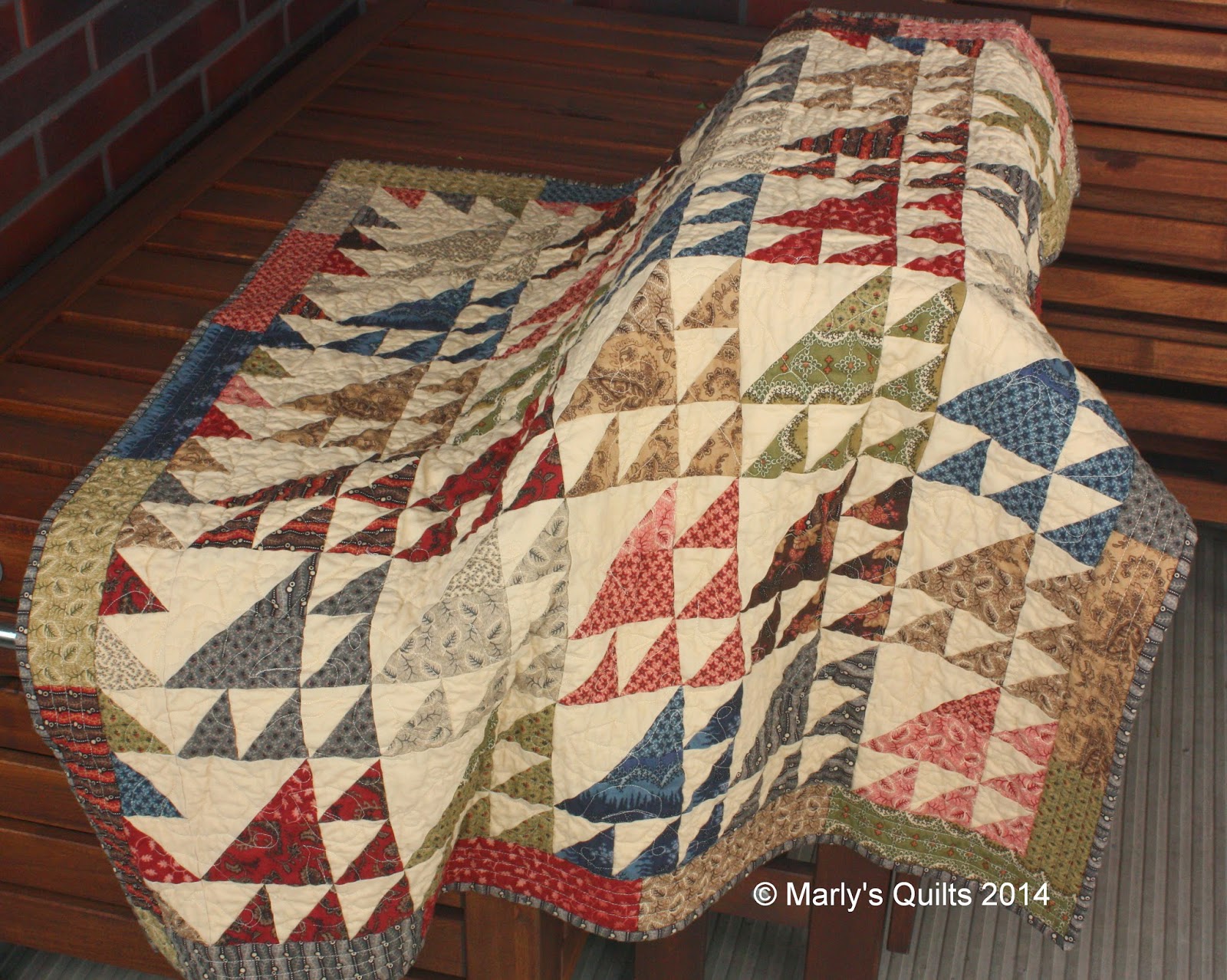 The block is simple: one large and five small HSTs, made from 2.5" strips so each small HST measures 2 by 2"

In the photo below the block construction shows up more clearly. The large print triangles were cut from two strip-pieced jelly roll strips of the same colour; the solid triangles from a 4.5" strip. I cut all the triangles, large and small, using my Omnigrid 96 ruler from paired strips - one solid, one print - lying right sides together.

I got rather carried away and made one block too many! Now I have a themed label.
I stitched the information on the label by machine having reinforced the back of that piece with fusible Vlieseline H180. I stitched the label on after quilting and together with the binding, but I think next time I make such a large label I'll appliqué it before quilting. Such a large overall quilting design wouldn't make the label illegible; it would hold it in place better.

This is my second finish for the second quarter:
As far as the Finish Along goes, I'm behind schedule. It's time to move on to putting the borders onto Celtic Solstice and getting the quilting done.

so hop over there to see what other people have finished this week. 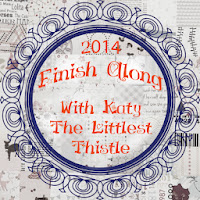 This is my second finish in Q2 of Finish Along.

At the end of the second quarter I'm linking my finishes to Katy at the Littlest Thistle. Click on the logo above to view other participants' finishes.