This will be the first time I participate in a Round Robin and I'm nervous to say the least!
District West of the Dutch MQG  has a quilting bee - the Bee Zonder Naam (BZN) - which meets once in two months and is organising a Round Robin. The centre blocks are due on 15 May but I've finished mine already. (I don't know what came over me, I'm not usually that early with anything!)

This block is a composition using the stitch and flip triangle technique, featured in "Quilting Modern" by Jacquie Gering and Katie Pedersen. It is a variation on the traditional stitch and flip technique, and the result is similar to the points on the wonky star block. I really enjoyed making it and will certainly be using this technique much more in future. (By the way, I don't earn anything for recommending this book, I just think it's a really useful book on modern quilting.)

The block measures 10.5" square and was made using pink scraps and solid taupe by either Michael Miller or American Made Brand, I'm afraid I don't remember which.

Although I shall be working on this each month for the rest of the year at least, I won't be posting about it until I'm at the quilting stage.


This is my third finish for

which I wrote about here . Click on the button above to visit the party.

This is my second finish for April's One Monthly goal, which I posted about here

The Dutch Modern Quilt Guild's theme of the month for March is "Orange" or in Dutch "Oranje" which is the name of the colour and of the Royal Family. The royal connection to the colour has given rise to the predominance of the colour orange in the clothing of our national sports teams. As it's the King's birthday the day after tomorrow shops are full of orange-coloured goods; everything from tee-shirts to pastries; I think this month's Dutch MQG theme choice was also informed by this week's event.

Anyway, I, being originally British, decided that "orange" is a fruit as well as a colour and made my representation of an orange, rolling down the drunkard's path! I think it will become the first of several blocks featuring complementary pairs of colours.

This was incidentally my first attempt at appliqué letters, drawn freehand, traced onto tracing paper and then traced again back-to-front onto Heat and Bond . It was much easier than I expected. The DP blocks I made without pins, following the perfect tutorial by Leanne at she can quilt.

This little piece of patchwork measures 13.75" x 15.5" and is waiting to be joined by more similar paired-colour pieces.


I'm linking this to

We have a public holiday here on Friday, in honour of the King's birthday; if you're in The Netherlands make the most of your free day, and for the rest of the world:

Each month Angela at So Scrappy gives a colour and Mari at The Academic Quilter posts a block pattern for the Squared Away sampler. This month's colour is yellow.

There is also a yellow wonky-star block on the go, but I doubt it will be finished by next Saturday; my day job is rather busy at the moment.
I'm linking up with So Scrappy for the Rainbow Scrap Challenge.

Click on the button to join the party and see more sparkling loveliness.

Email ThisBlogThis!Share to TwitterShare to FacebookShare to Pinterest
Labels: RSC18, Squared Away, yellow 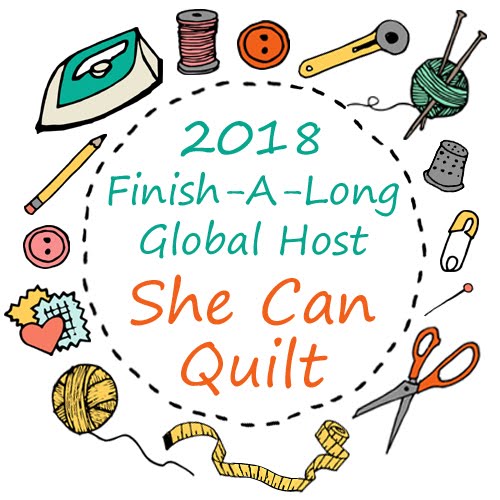 In the second quarter of 2018 I hope to finish:

1.  my version of Bonnie Hunter's "En Provence". The top has been finished for over a year, 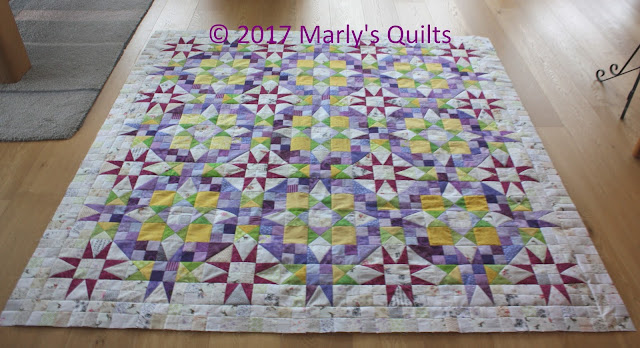 but I'm still working on piecing the backing:


Numbers 2 and 3 haven't been started yet, so I'm being optimistic, but they are in the planning stage, and both will be small!

Here it is then: quilted and bound. 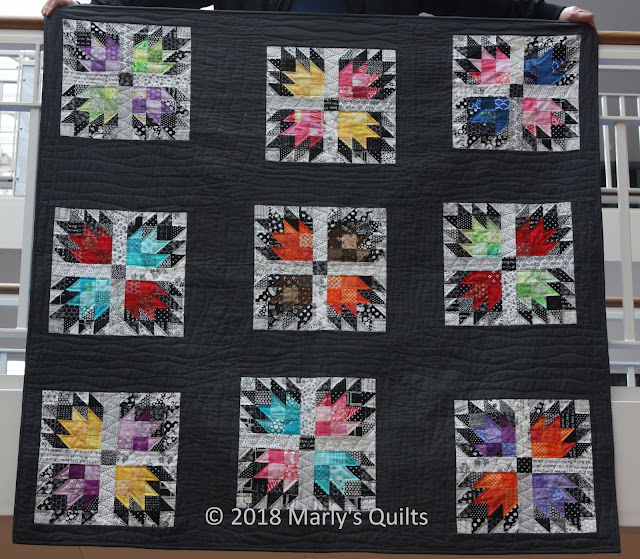 My Rainbow Scrap Challenge quilt from 2016. The top has been finished for about a year, but now it's finally finished. 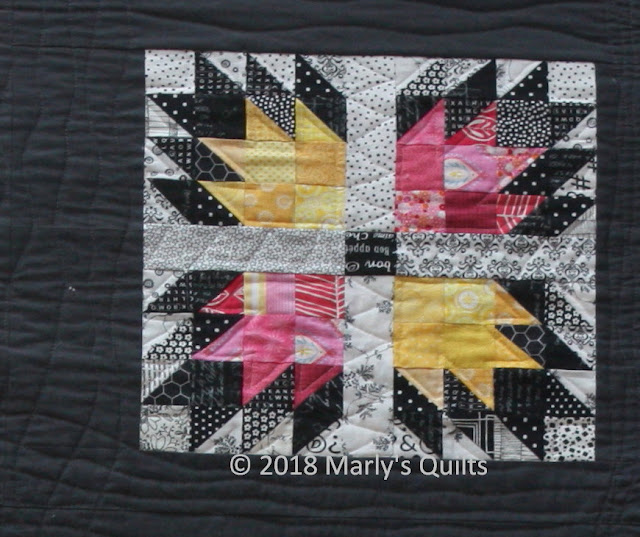 The quilting is quite simple: FMQ motif echoing within the "paws" and zig-zags in the block sashing, with gentle curves with the walking foot in the background space. I don't know why it took me so long to decide on that!

I like the whole top, but I think the back is the tops: 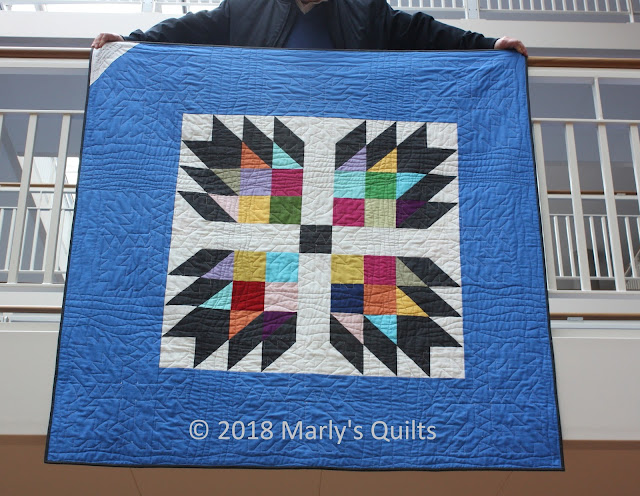 I just love the back! It makes me feel so happy!

Now just one more photo, over the railing: 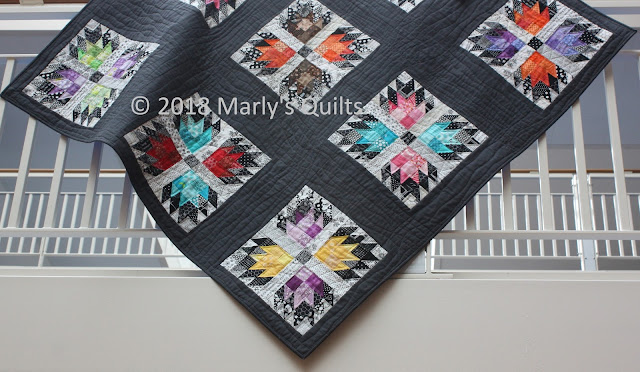 This is my second finish for
the 2018 finish along Q1 which I posted about here.

this is my first finish for April's One Monthly goal, which I posted about here

Click on the buttons to visit the link ups.


I'm going to link up my quilting goals for March at Patty's "One Monthly Goal" at Elm Street Quilts.

Firstly, for the third month in succession, is this:
It could be my only goal; will I get it finished in April? Hopefully! It's about time! So, just in case I do, I've added a few more goals!

Secondly, to make a theme block for the Dutch Modern Quilt Guild April Challenge. The name says it all doesn't it? It has to be finished this month! No pictures yet (no stitches either!) but the theme could be patriotic - or not!

Thirdly, To get started on my centre block for the Round Robin Challenge at the District West Bee of the Dutch Modern Quilt Guild. It's not due until the middle of May, but I've never taken part in a Round Robin before and don't know what sort of hidden pitfalls lie ahead, so I need to give myself plenty of time.

Fourthly, if I still have time over, to finish piecing the backing of:

I had quite a few parts that weren't needed in my final layout which was smaller than Bonnie Hunter's. The same happens every year - I have to frantically make extras of some units; and have too many of others! That's part of the mystery!


Now to link up to

Click on the button to see the handicraft plans of others.