Knitting in a magic loop: new to me!

New to me in August is knitting in magic loop. It isn't that I've neglected patchwork altogether, but the expected arrival of twins in the family in December has necessitated the shelving of some projects and focussing on the babies! In this case knitting hats for new-born babies.

So, following my new-to-me knitting on a circular needle last month, I've already taken that skill one step further with the magic loop. It took me a couple of hours with a number of You-tube videos to get it right.

Really it's very easy: after casting on you push all the stitches onto the cable, divide them into two, pull the cable between the two groups of stitches - that's the loop - here on the left of the picture. Then you think of when you are knitting on two needles - when you start, in which hand do you have the empty needle?  Right hand, left hand, it makes no difference, it's just what you're used to. The stitches on that side stay on the cable with the last stitch you cast on (and the yarn) nearest to the empty needle, and the stitches on the other side you push onto the other needle; they are the ones you knit first.

Then it's just like working on two needles until they've all changed from one needle to the other. Then you slip the stitches you just knitted onto the cable, being careful not to loose the loop, and pull the "resting" stitches onto the working needle, turn the work round, just like working with two needles, ... and repeat!

You just have to remember to have half the stitches on the needle and half on the cable as you begin every "row".

The You-Tube films were useful, and not! I'm British and knit the stitches from the left needle to the right, with the yarn in my right hand. Most of the films were by Americans who had the wool in their left hand which I found crazily disorientating! There was even one woman knitting onto the left hand needle. Finally I found someone who knits the way I do and then everything fell into place.

The original pattern for these hats is for DK yarn, but I adapted it for 4-ply - premature size: 80 stitches, new-born: 90 stitches. That's also something new for me: adapting a knitting pattern. It's only a small garment and a very simple pattern. I've never adapted a cardigan pattern for myself, except the length of the sleeves - something that doesn't involve maths! Any advanced calculations I've never attempted, but now I think the maths isn't so difficult, it just needs some thought and planning!

Click on the button to see what others have discovered this month.

My goal for August was to start cutting and sewing the pieces for a play mat for twins due in December.

I started the month with this: 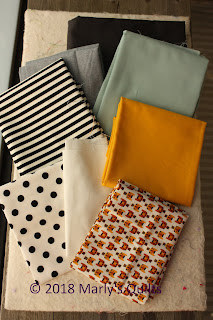 In the meantime I took out this:

and replaced it with this: 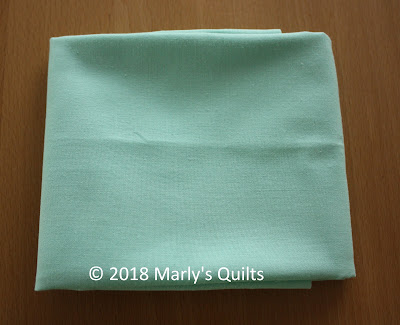 A much brighter pale green.

And have so far sewn about two-thirds of the pieces:

"Sewn" isn't right in all cases, as some of them are staying as 6" squares! I just sewed the HSTs and an hour-glass block.

I showed the parents what I had on the design wall and they were happy with how it's going. Now I just have to finish the blocks and decide on the layout. The top might even be finished this month.

I'm sorry I can't show more: it has to remain something of a surprise!

Click on the link to see more August goals met.

The Rainbow Scrap Challenge for August is orange. Mari posted new block for the Squared Away Sampler, and Angela decided on the colour.

Here are my two 10" blocks in orange and brown. 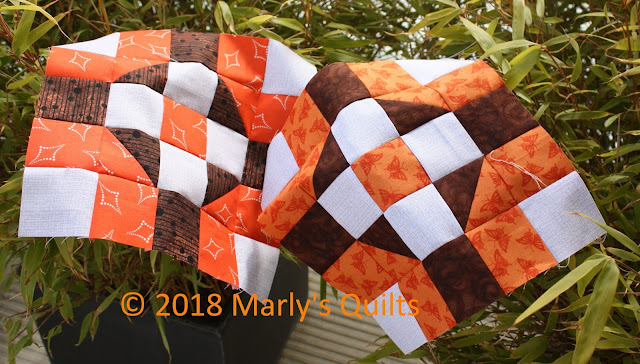 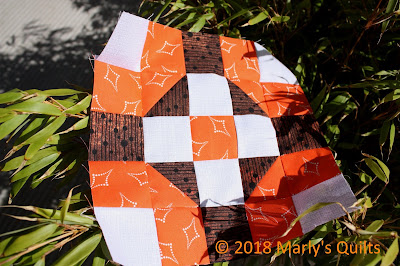 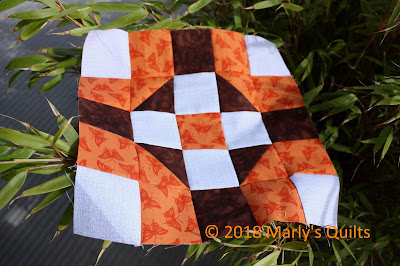 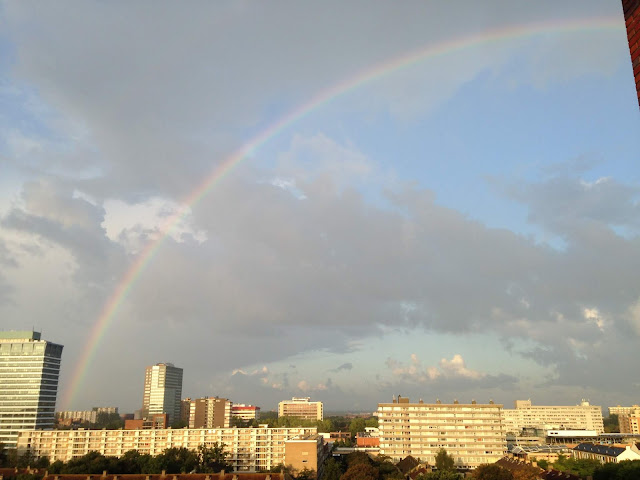 This heralded the end of the heatwave yesterday. This rainbow was a complete semicircle, continuing round to fade into another block of flats about 1km. away to my right. I've never seen a complete rainbow before; they usually fade away before they get to a quarter circle.

On the weather front: the heatwave is over! Hooray! The daytime temperatures above 30°C (normal body temp is 36) are in the past. Yesterday's rain didn't amount to much so it didn't make any difference to the yellow crunchy grass.

Click on the button to see more orange scraps being put to good use!

My goal for August is firstly to find some yellow & white or mint green & white striped fabric to match these:


and then to start cutting and sewing the blocks for a play-mat for twins expected by a family member in December. A play-pen for twins is longer and narrower than usual, approximately 1.5m x 0.8m., I think, but don't worry, I have the measurements somewhere!

I don’t wash my fabric before sewing, but wash the finished quilts so that the wadding can shrink and become puffy. I’ve never bothered to measure a quilt before and after washing, but now I need to know what sort of percentage shrinkage I can expect. Do you know? I’d be grateful if you could share your knowledge.

If you click on the button you'll find more August goals.