The colour for August in the Rainbow Scrap Challenge is Neutral. My scrappy project thie year is to use my scraps to make scrappy storage baskets and at the beginning of this week I was able to add another basket to the row. 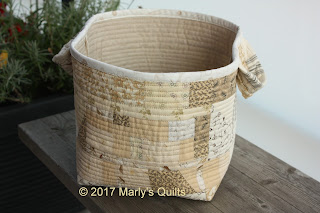 All are in use, but have themselves depleted the scrap supply - what I wanted, of course - and are squishy and falling about. Maybe placing the quilting lines even closer together would have given more stability; maybe another type of wadding would have worked better. I have used what I had and the result tends to fall over somewhat when empty. Tough! 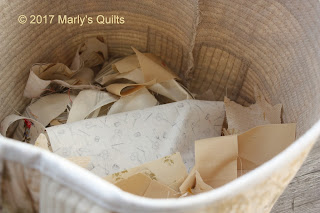 This basket has less "made fabric" than the others and more ends of strips and and long pieces from trimming backing. What all the baskets have in common though is that all are unlined. That's what drew me first to this pattern from Fiona at BubzRugz; it is quilt-as-you-go and then the sections are joined in the usual way for a bag with a flat base, with the backing serving as the lining. It's not as neat as it could be, but I'm not selling or even giving these away, they are solely for my own use and I'm not bothered about a lining; in fact I'd rather do without the hassle of turning the whole lot through a small hole in the lining.

Click on the above button to pop over there and see more projects with scrappy neutrals.

Neutral basket in the making


Neutral is the Rainbow Scrap Challenge colour for August. I didn't think I had enough neutral fabric for a basket, and I didn't! Not strictly neutral, at any rate. Some of these look decidedly brown, but are a mix of beige and grey, and some are ecru and grey. 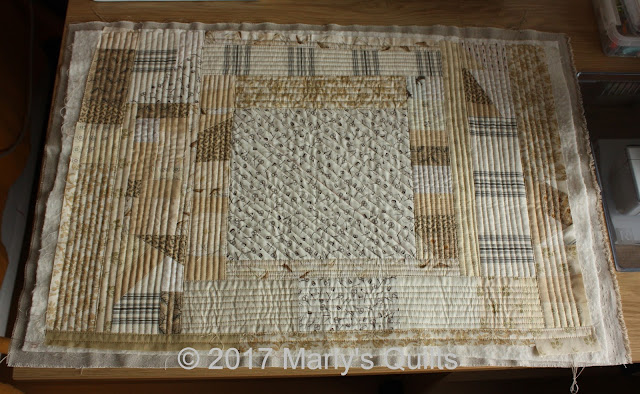 I deliberately avoided any other colours, even though I have a lot of "neutral" with some other colours left from making Bonnie Hunter's mystery quilts. By her definition "neutral fabric" can have other colours in it, as long as they amount to less than 50%. This does give a more dynamic effect than solid white as here below where the neutral features orange hens, brown sewing notions, red lines, multi coloured polka dots and ecru buttons.

So my neutral bag will have some other darker shades in it, I could say for effect, but in fact without them I wouldn't have a neutral bag at all!

so hop over there and see more neutral projects.

Catching up with green and yellow

For the Rainbow Scrap Challenge (RSC) Angela at Soscrappy sets a different colour every month and for several years I've tried to make something in each month's colour. May's colour was green and June's was yellow. Here are my green and yellow scraps. Very late!

When my laptop packed up in April this year salvaging what I could from it took a lot of time; time that otherwise would have been spent sewing. Instead of interesting sewing I was moving files to an extension drive or to the recycle bin. How boring! One thing that initially couldn't be salvaged was my camera software; officially it has to be reinstalled from the CD. An impossible task if your laptop doesn't have a CD drive! Fortunately my husband found a way of extracting the software from the old computer, but that was the last he did before wiping the laptop clean towards the end of July. So now I'm able to post my rainbow progress, such as it is.

Now I am no longer struggling with software and data I have time for sewing again and am now only two months behind with the RSC colours! I have no more Jacob's Ladder blocks to show, and no more wonky stars; to be honest I've been using scraps faster than generating them. I think those will have to wait until I've made more projects, but first I have more quilting to do


On Saturday I'm linking up to

and on Sunday to

Click on the buttons to visit there and see lots more beautiful scrappiness.

I have a second finish to report this week. This one was really a UFO, as it was the Quiltville mystery from December 2015 of which I finished the piecing well over a year ago. It took me another six months to get the borders done. 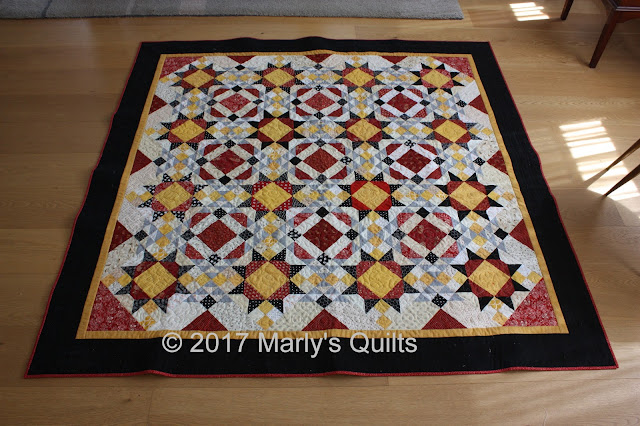 After my frustration while quilting Star Light, Star Dark I decided on simple all-over "circles-on-a-string" in the centre section which was so easy (but still with the odd pointed bit in a circle here or there!) and on a vine with leaves and bunches of grapes in the corners (a nod to Chianti here) for the outer border. 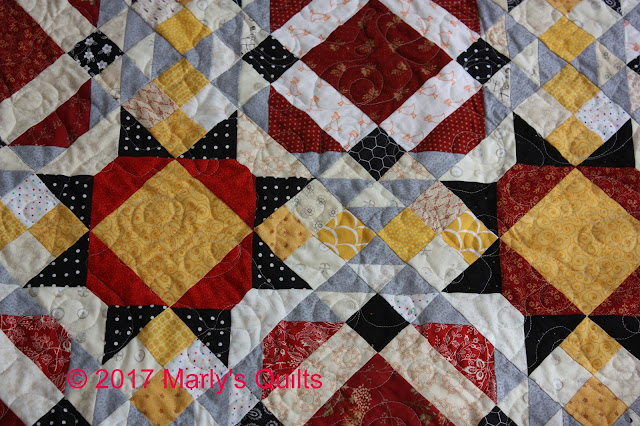 I could have used any colour thread on the border but because my quilting often has those erratic hooks in it I decided to match the thread to the border fabric. Have you ever tried sewing black on black? Well mistakes certainly wouldn't have been noticeable; when I finished the first leaf I couldn't see where it had begun. When you sew white on white the stitches have shadows; you can't see the shadows on black. It's a shame about the Chianti but it was not to be! More unpicking, and then I quilted "tramlines" with the walking foot - easy and .... boring!

I was really happy to have this finished and ready to be used this winter.

So pop over there and see what else has been finished this week. 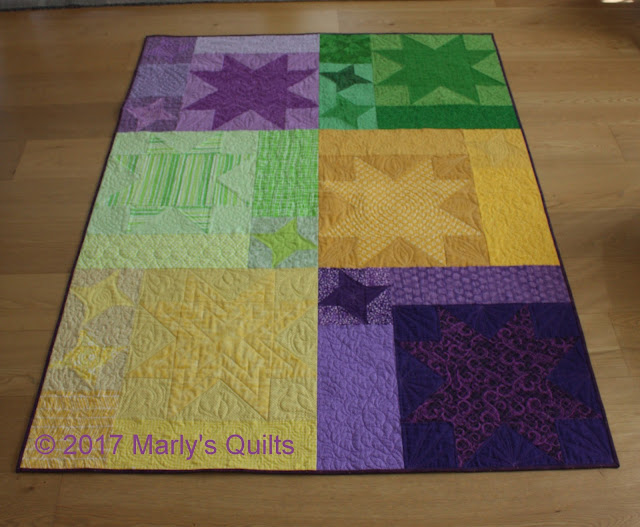 This is my variation of Star Light, Star Dark from the QAL at Quilty Habit last summer.  The challenge was to use only three colours, six or seven fabrics in light tones and six or seven in dark.
I finished the piecing quite quickly, but when I got to that point I still hadn't decided on the quilting designs. The only thing I was clear about was that it needed doing in two halves to be joined later. (On 1 October last year I showed this in more detail)

The centre star (yellow) was done with the walking foot, and having only half a quilt to turn the whole time was a Godsend.
The green section went OK too, though admittedly with a few wobbles. Then I tried doing feathers in the large dark purple star. What a disaster! I just can't backtrack, so there was such a build up of thread along the spine of the feathers I thought, "this bird would never get off the ground!"

Then I decided that there was only one thing for it - unpicking all the feathers - which took me every evening for a week. Then I tried swirls, after all I would only have to follow the motif of the print. No! What a mess! Fortunately this time I decided after just a couple of minutes that it had to go. Out it all came! Totally disheartened by my failures in the dark half of the quilt I moved onto the light section until I got distracted by Bonnie Hunter's Mystery quilt. That was in November! That was how it stayed for more than half a year.

Until two weeks ago when I thought of Leah Day and all her online FMQ videos. That dark purple fabric wouldn't stand another unpicking session so I needed something simple and foolproof. I chose Matrix Rays, and the quilting was finished in no time. All that remained was to join the two halves and then a lot of hand sewing to cover the join on the back, and to sew down the binding.

I was pleased with how this square flower turned out. I quilted square flowers in all three purple Friendship Stars, but this one turned out best. In the green F.Stars I quilted orange peels, and in the yellow spirals.


In the light purple block I used more McTavishing;  I used this quilting style three times in this quilt. So much for using a different motif on each fabric. I really found it hard to come up with enough quilting motifs.

Finally one more photo to show why all the photos were taken indoors this afternoon. 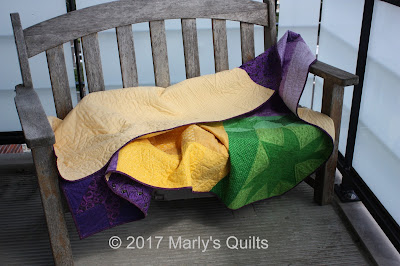 I draped it artistically over the bench, took two steps back and took a photo just as the wind caught it. As I live on the ninth floor I didn't want the wind carrying it away altogether: I'd never catch up with it!

so go over there and see more of this week's finishes.