A new Technique - Mola (at least new to me!)

Actually Mola is probably a very old sewing technique; it is practised by the Kuna people in South America, and used to decorate their clothing. I hadn't seen it until the end of August (too late for last month's link up!), when I attended a workshop, and had thought it was the same as reverse appliqué. Apparently it isn't, so now I have to investigate reverse appliqué as well.


Update Sunday 16:02 h
Dasha at Patching  Pixies commented below that it looks like reverse appliqué so I checked with Linda Clements' publication "A Quilter's Bible" and she gives Mola as an example of reverse appliqué! The teacher at the workshop had said the Mola is worked from the front and reverse appliqué from the back. Does anyone else have any thoughts on this?


The workshop project was to make a representation of a cat:


Everyone was asked to bring two fabric squares of at least 15cm (6") of which at least one should be a solid.
We cut out a paper template and then drew round the stylised outline of a cat onto the plain fabric.
Next we tacked the two pieces of fabric together about 8mm on either side of the drawn line.

I was too busy during the workshop to take many photos, but did manage to take one with my phone:

The next step was to carefully cut through the top fabric along a small length of the drawn line and to fold the edges under and sew them down with an invisible appliqué stitch (or as near invisible as possible!)

The following step was to insert another piece of fabric between the two layers to make the vertical lines on the cat's body. For this two cuts had to be made in the top layer and a piece of fabric (here dark green) pushed and pulled into place between the two squares. The pin in the second photo is holding the fabric in position while I was sewing down the edges of the vertical splits.

This was an interesting afternoon learning a new technique, but I'm not sure how I'm going to apply this to anything I'm likely to be making soon. I haven't finished the piece yet as I still have to make the eyes; that will be the real challenge as sewing round the inside of a small circle is more difficult than a straight line, and look what a mess I made of the vertical lines (they are meant to be the same size!). If I finish it this side of Christmas I'll post again about my progress!


I'm linking up with Celtic Thistle Stitches for

Email ThisBlogThis!Share to TwitterShare to FacebookShare to Pinterest
Labels: Mola


This month Angela at Soscrappy is giving sampler blocks to be made in orange for the Rainbow Scrap Sampler quilt. These are 6" sampler blocks, surrounded by a Sawtooth Star, and in the final quilt separated by an Irish Chain type of block echoing the colours of the adjacent Sawtooth Star blocks.

This is the star I made this week:

I also made a few orange 9-patches with my smallest scraps - they finish at 3". 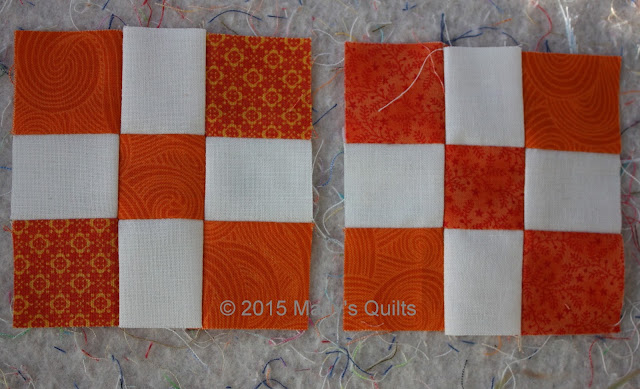 I'm sure I had three, but one must have slipped under the sewing machine cabinet!

This week I shall try to make the third orange star (which Angela posted earlier this week), and the orange and red alternate blocks.

I made little progress in assembling my maple leaves quilt, but I just have to sew one long seam to connect the last two rows. Then I can move onto the quilting.


I'm linking up with 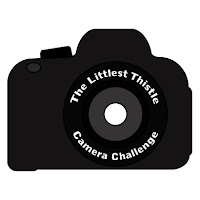 Each month Katy at The Littlest Thistle sets a camera challenge, with a follow-up post showing what we should/ might have discovered, a link up and some very helpful comments. The challenge this month has been to photograph a small group of objects in different positions indoors, firstly in different locations with good natural light - near windows.


I warn you this is a post with an awful lot of photos of the same thing. Not exactly super interesting, but bear with me.

My first set was taken within twenty minutes of sunrise: 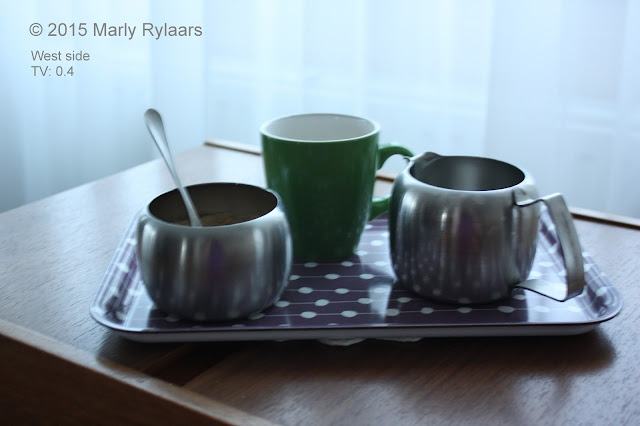 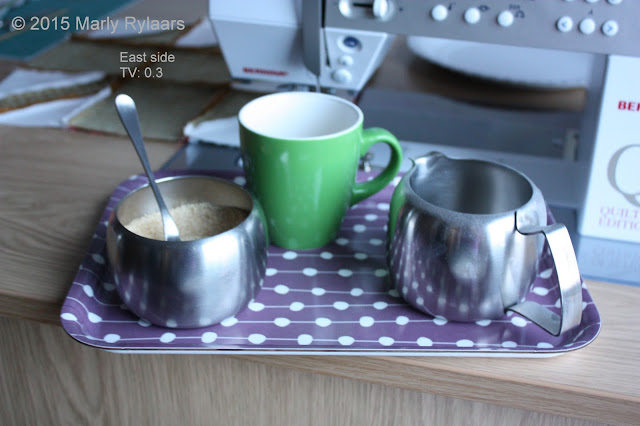 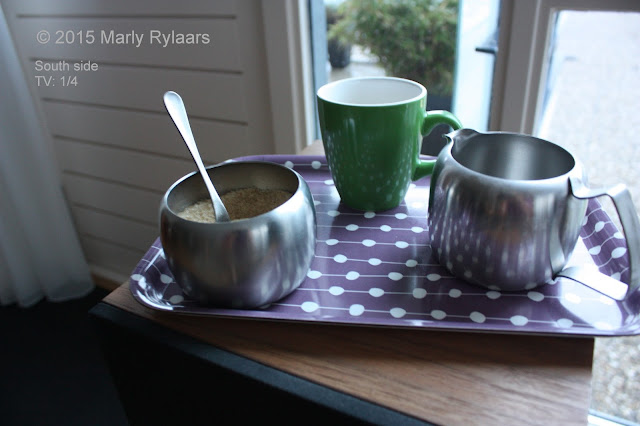 All photos were taken with ISO 800 and aperture value 4.5 on an overcast morning.

The two photos on the east side of the apartment were taken further from the window, but when I tried to repeat that on the south side I discovered that, although I can hold my breath for one and a half seconds, I can't keep still! Of course I could then have changed the ISO to 1600, but that would have upset the experiment.

I found it interesting that the shutter speed became faster over the ten minutes. Clearly in response to increasing light as the sun rose. (Not that it was visible from the ground!)

What really surprised me, however is the time difference between the 2nd and 3rd photos (on the east side). When I'm at the sewing machine the trolley is immediately behind my stool, so between taking the photos I simply picked up the tray, turned through 180°, and put it on the trolley; no walking involved. The tray was, however about 15 cm (6") lower in the second photo. Personally I prefer the result with light from that angle. All in all I prefer the lighting in the fourth photo:


Just after sunrise: south side of the apartment has the best light,

the east side has the least bluish colouring, but all are blue.

All the photos were taken with the same ISO setting (800) at about our natural midday - 13:40. The weather was heavy cloud and rain. 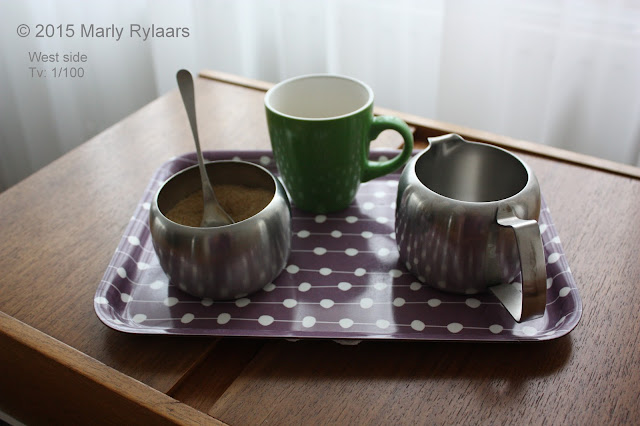 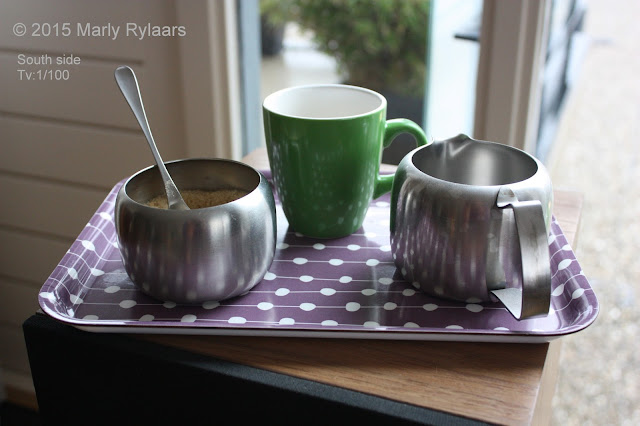 but don't expect a repeat! 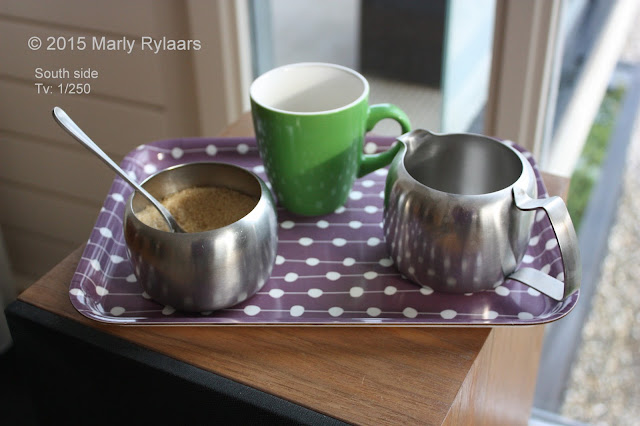 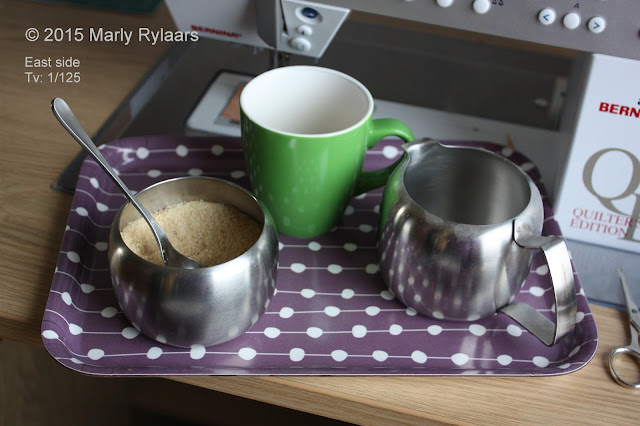 I think all the late afternoon photos have good colour. It was too early (around 18:00h) for the "golden glow" we were looking at last month, but there was little prospect of actually seeing the sunset that day.

differences would probably be more marked in sunny weather

And now for the big

At least, this I had not expected:
At midday; ISO 800, shutter speed 1/13th second: perfect colour.

I should add that living on the ninth floor with a lot of windows and no other tall buildings close to cast shadows, and certainly no trees this high, I have a lot of light to work with.

And now for something completely different!

Sometimes  we can witness strange weather phenomena too. Such as this photo just after sunset during a thunder storm on 26 August, just too late for last month's challenge. The sun had just set over to the right, but incredibly had been visible for a couple of minutes, following two hours of torrential rain and thunder and lightning. Then the last of the sunshine lit up the underside of the thick cloud cover and bathed the whole landscape in gold. I've never seen this before and found it impressive. People living closer to the ground hadn't seen the sunset, were worried and called the police!


I took all three photos within one minute. The second two with the window being held open by my husband so that this crazy woman could tempt fate and stick her head out of the window at about 50m during a thunder storm!

Thanks for reading so far; I hope all the photos of the tray with coffee stuff weren't too boring for you.

so click on the image above and hop over there to see other photo studies using natural light indoors.

This month Angela at Soscrappy is giving sampler blocks to be made in orange for the Rainbow Scrap Sampler quilt.

I just found this on Angela's blog on Thursday evening and made it this morning, only to discover just now that she has posted a second block, twirling four-patch, this week. This sounds like being a dizzy month. My twirling four patch will have to wait until next week!

This week I have been working on my Modern Maples, in between the odd bit of paid work that finances my hobby! The rows are now joined together, but I'm afraid I forgot to take a photo when they were laid out on the living room floor. All I have to show is a photo I took last Sunday with my phone, while I was trying to figure out where the few 6" blocks I'd made could go, so I could remember the layout when I recreated it on the floor.

Thank you to everyone who gave ideas about using smaller blocks two weeks ago. I decided against using them: they may become a cushion, but for now they're in the "orphan box". I've stuck to the original pattern layout, with a lot of white space around the short rows. Hopefully I'll have a finished top to show this time next week before I embark on the quilting challenge of all that "white space".

I recommend your taking a trip over there to admire the work
of the other scrappily challenged rainbow lovers.

Each month Angela at Soscrappy posts a colour and some sampler blocks for the Rainbow Scrap Challenge. August's colour was indigo, but I used Royal blue instead to give more contrast with the dark blue background I'm using. The three blocks from August are in the middle row below with their adjacent blocks. The blocks are joined in the rows, but the rows aren't complete yet.
September's colour is orange, but although Angela hasn't posted any sampler blocks, I've been sewing orange in a new project.

This week I started a new quilt, using the first quilt pattern I ever downloaded, when I'd just discovered there were quilting resources on the Internet! Haven't I moved on a long way from that day? Yet it was only two years ago! It's called Modern Maples Throw Quilt by Amanda Woodward-Jennings. I couldn't find a direct link to her pattern, but you can get there via Hossiertoni and scroll down to the last paragraph where she has posted a link to the download.

After a lot of cutting of, for me, enormous pieces I've sewn a few leaves. They're not all orange, but as this is the orange month at RSC15 ....

When I first read this pattern I couldn't understand why I needed to cut squares in two sizes! I thought that was very extravagant cutting, because the finished squares all look the same size in the photo, don't they? (Being a novice I'd not yet figured out HSTs) Disappointedly I put it away. I found it again this week, reread it and decided to start. Thanks to my Omnigrid 90° ruler (EZ angle ruler look-alike) I've been able to cut all the pieces except the leaf stem from 4½" strips. What a relief! I'm using a mixture of prints, some modern and some 19th century reproductions, as long as the colours suit my plan. I'm toying with the idea of making some 6" leaf blocks, but maybe they will make it too fussy. Still thinking about that.

Anyway, cutting all these large pieces has generated quite some scraps, so Angela, roll out the orange blocks!

so pop over there and visit other Rainbow Scrap Challengers.