Unfortunately I didn't achieve my goal of finishing quilting the Do. good stitches quilt last month. 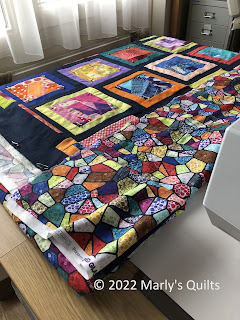 So it has carried over into July; my goal this month is to move this quilt on further.

I just haven't been able to settle to it. I have been finding recently that manoeuvring the quilt during FMQ puts strain on my hands so I can't do more than about 15 minutes in one stretch. The recent high humidity doesn't seem to help. My machine is due for servicing so I think I'll make an appointment with the dealer this week and give myself an enforced rest from FMQ!

So what did I do to this quilt in the last month? I finished the "wishbone" motif on the sashing and quilted a few hearts on the blue crumb squares. I've decided to do a simple motif in every square, giving squares of the same colour the same motif.

We'll have to see how far this project advances in the next month.

Click on the button above to see more patchwork and quilting aspirations.

Unfortunately I didn't make much progress with my goal in May. I started quilting but strained my right shoulder and have stopped again for the moment. My goal for this month is the same as for last - to quilt the Do Good Stitches quilt the Comfort Circle group made in March. 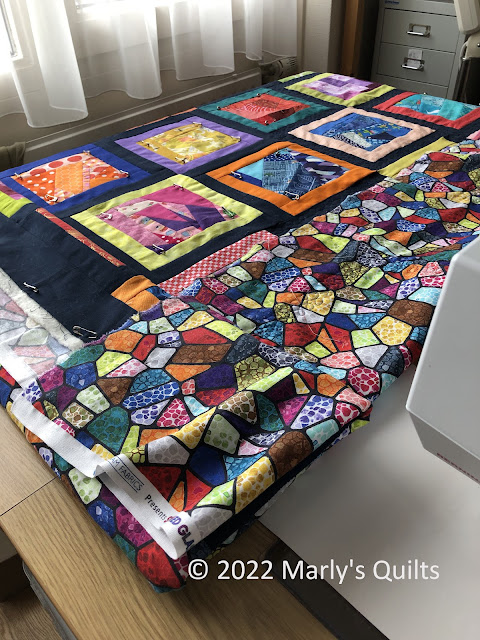 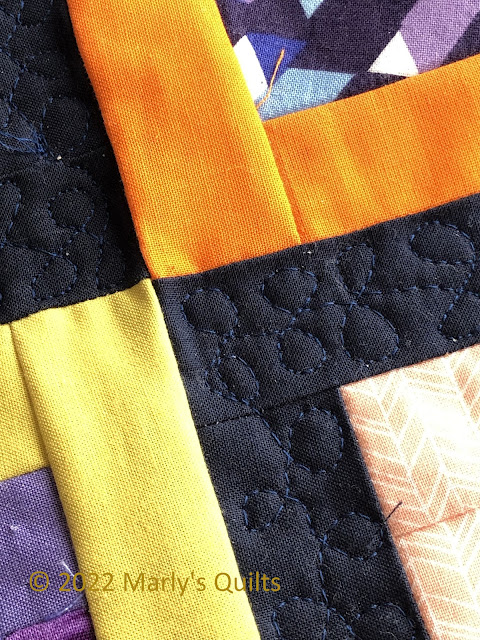 I'm quilting the sashing with, supposedly, a wishbone motif but the loops are turning out too rounded when I'm moving the quilt away from or towards me. I only seem to get it right when sewing from right to left. Still, it looks quite pretty the way it is.

It's not perfect; I blame the shoulder! However, more practice wouldn't go amiss!

I'm linking up to Elm Street Quilts for One Monthly Goal in June.

One Monthly Goal in May

Last week I showed the finished top of the Comfort Circle's March quilt for DO. good stitches. 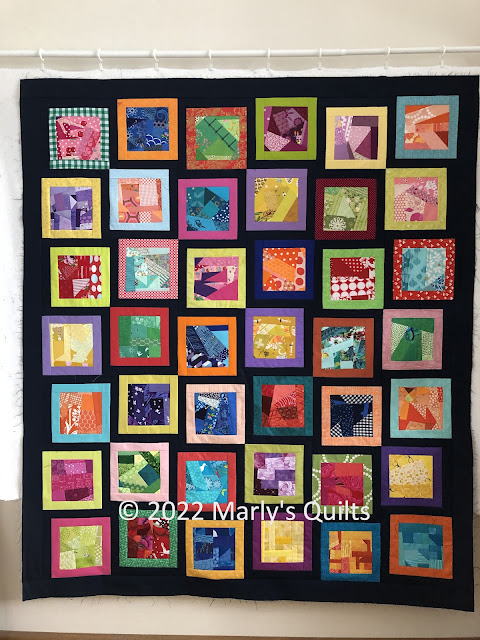 My goal for May is to quilt it.

I'm linking this to

Click on the button to see more handwork aspirations.

My one monthly goal for April was to assemble, and possibly quilt, the quilt my bee mates in the Comfort Circle contributed to in March. The last four crumb blocks arrived this Wednesday (there have been problems with postal deliveries from the UK recently) and I could add them to the rest that already had sashing added. I'm grateful to my friends in the Comfort Circle, most of whom I've never met, for making these crumb blocks. Some of them had never made them before, and one confessed to never saving her scraps! Well done all!

I won't get it quilted this month, that I know! I have finished the top, however.

I spent some time contemplating these two layouts: ⬆dancing squares,

I'm not a great fan of sashing, but in this case the sashing provides the only "resting points" in the whole quilt. Dancing squares was my original idea, even before the blocks started arriving. It's not original in the sense of unique; I saw it first on Bonnie Hunter's Dancing Nine Patch free pattern, and I've used it several times. It was original in the sense of "my first idea", but when I tried with the first dozen or so blocks I found it rather chaotic and rearranged them in the more usual straight sashing formation.

Once all the blocks were in, I finally decided on the dancing squares layout.

Backing fabric has been chosen from my stash so next month's goal will be to add the label and to quilt and deliver this quilt.

Click on the buttons to see more happy handwork.

In March I was the Queen Bee for the Do Good Stitches' Comfort Circle. This is a European group with members in the UK and The Netherlands. My assignment for the group was to make four crumb squares with borders similar to this one 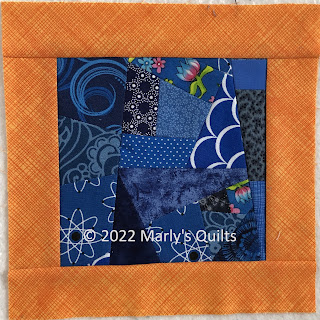 in the colours of their choice.

So far I have received blocks from five of the nine other members but I'm banking on the rest arriving in the next few days.

I expect to start adding sashing to the blocks I have now at the weekend and hope that by the 15th I have enough to lay them out satisfactorily and start sewing them together ready to donate.

Frédérique at Patchwork and Quilts

Click on the links above to see more works in progress.

My goal for this month was to finish the Kawandi quilt I started at the end of February. And I did! Here it is: 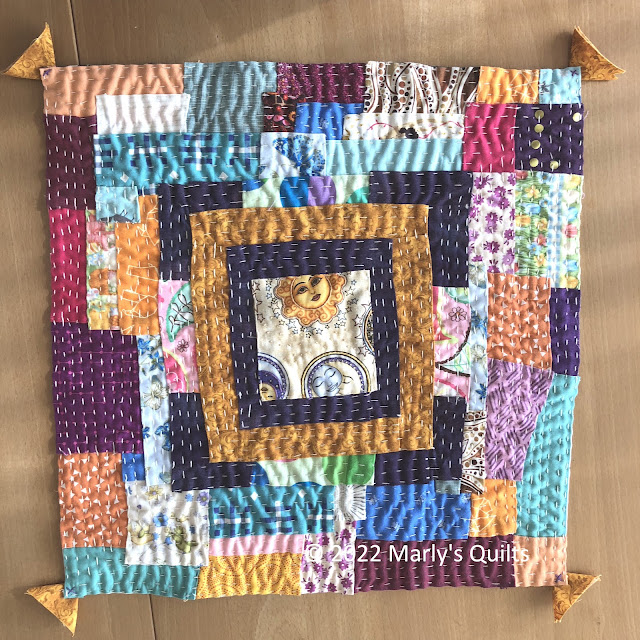 It is just 38 x 38 cm, and made from a bag of scraps from other members of the Dutch Modern Quilt Guild. The rules of the challenge were to use scraps from the bag to make something and to only use two fabrics from your own stash. Apart from the backing and wadding I only used one fabric - the purple frame and the corners to the centrepiece; all the rest was from the bag.

I used Aurifil no. 12 cotton throughout, except for the French knots in the centrepiece which are two strands of DMC stranded cotton.

I posted earlier about this project: here and here . In the second of these posts I described the process.

Although the process is not difficult I found this slow going at the beginning. Not surprising as I had to find a way to anchor the side edges of the pieces as I added them, and the lines of stitching are obviously longer on the outside of the piece. This was intended as a sampler, a practice piece; I knew it wouldn't be perfect and yet I'm satisfied with the result. I learnt a lot in the making!

I am linking up to:

Click on the link to see what others have been up to.

Two weeks ago I posted this photo of my mini Kawandi project: 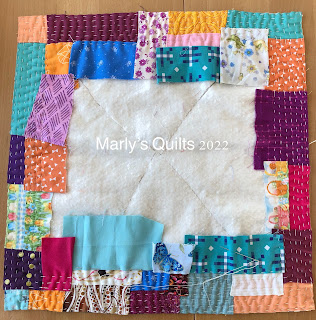 Kawandi is the name for quilt in the dialect of the Siddi people in India. I've never been to India, but saw a few videos about these quilts while wandering around YouTube. As I'd never made a quilt using this technique I thought the Dutch MQG challenge to make something from other members' scraps would be the perfect opportunity to start.

Now it looks like this. The sewing together is finished. It measures 29 cm square and I just have to decorate the centre and make the "tassels" on the corners. Finishing this is my one monthly goal. 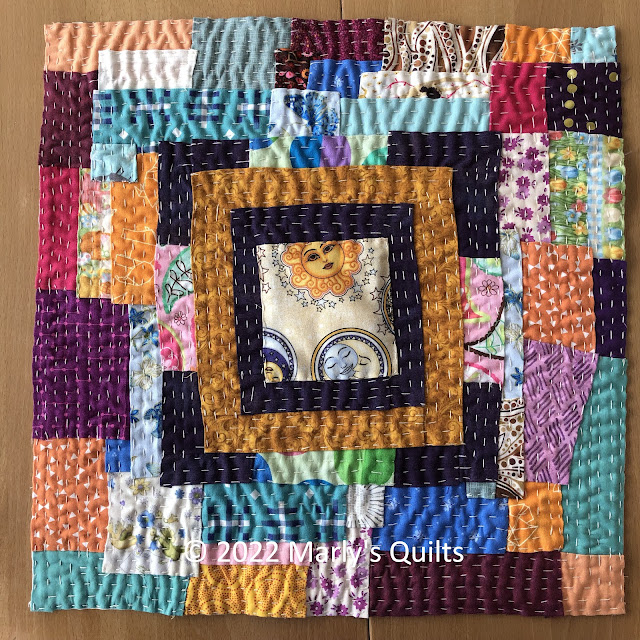 Characteristic of kawandi is the construction from the outside inwards using only two tools: a pair of scissors and a needle.

Not using an iron or a rotary cutter gives a wonky effect. I think the puckering has come from hand sewing through three layers, compressing the wadding in the process. While I moved on to the next few stitches the wadding sprung back into place. But this is just my idea, if anyone has another explanation, other than that I'm rubbish at hand quilting, please let me know.

The women in India who use this technique simply sew the pieces to a single foundation layer. When they have finished they add the backing, leaving a small opening on the fourth side through which they fill the kawandi with cotton waste. I'll try something like that next time (!) but substitute wadding for the cotton waste, and sew it onto the top together with the backing. Unfortunately that will also require quilting, and to be honest I've done enough hand quilting over the last three weeks to last me for the rest of the year!