After January's green, Angela gave orange as the colour for February. I like orange; it's such a happy sunny colour, and sunshine is what we could use here now!

I explained in January that I was combining several challenges so the hour-glasses for the AHIQ was combined with the RSC colour for January. And now February too!

Here are my improv hour-glass blocks: 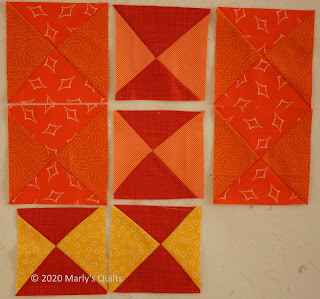 I really need to think about what I'm going to use as my RSC block this year. I don't intend making wonky hour-glass blocks next week, whether in red?, yellow?, pink? or ? ...


I shall be linking this in due time to:

click on the button above to see more orange happiness!

My goal for February was to make the two remaining blocks of the 2019 Summer Sampler and to remake my "disaster" block.

The focus in Sparkler was on creating transparency, but with my chosen fabrics it was difficult to really create a transparent effect; the fabrics were chosen for contrast rather than blending. I deliberately left this block until last, until I knew what was left to potentially work with.

The focus in Summertime Star was on Y-seams, which weren't a problem. However the problem here for me was getting all the points to come together in the middle. After unpicking the last seam three times I decided that right or wrong the fourth attempt would be the final one. Those bias edges were not getting any better. Finished is better than perfect.

And then block number 9, Oasis: it's still as it was at the beginning of the month. 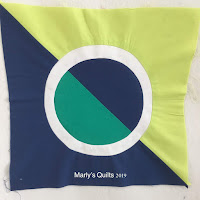 I've decided not to remake it, but to square it down to remove the wavy edges and then add a border.

I didn't fully achieve my goal, but at least I opened the project box and took stock of the situation. Trimming Oasis down to make it square and adding a border shouldn't take too much time, but then I have to think how I'm going to use the blocks. The projected layouts would result in a quilt that is far too big for my purposes. So what next? Two lap quilts? cushions? table runners? shopping bags? - not a good idea.

Click on the button to see other spectacular February finishes.

My One Monthly Goal in February

is to make the remaining two blocks of the Summer Sampler 2019: numbers 7, Sparkler, and 21, Summertime Star, and to redo number 9, which was an abysmal failure: 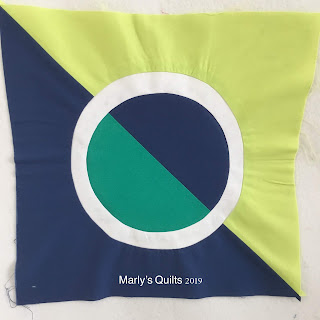 finishing a whole inch narrower across the middle than along the edges!

As block 7 is a transparency block, designed by Yvonne Fuchs, I left it until last to make sure I had enough fabric to make it in my own choice of colours.

I should be able to manage those this month.