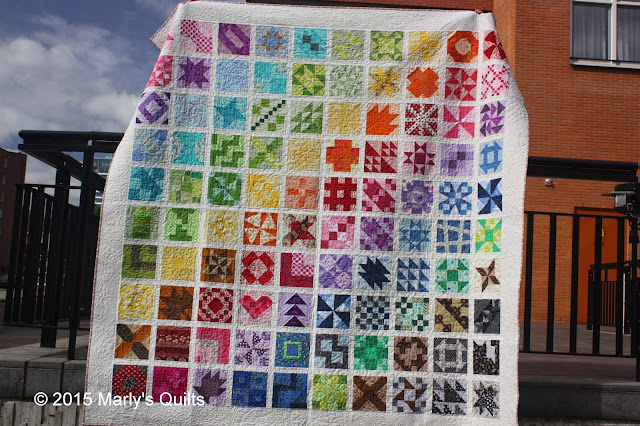 The patterns for the 6" sampler blocks were posted by Angela at Soscrappy: several each month. I didn't make all of them; my stash wasn't very big at the beginning of the year, but caught up later wherever I could. A couple of the blocks in the bottom row are from Tula Pink's "100 Modern Quilt Blocks."

I pieced the quilt with 1" sashings and a 5" border.
[Click on the next two photos below for more information] 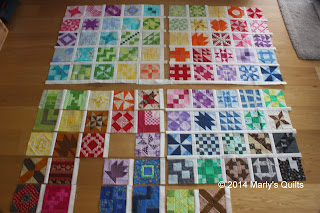 I joined the blocks into four square sections and added the borders before quilting. After quilting the patchwork blocks, but not the borders, the four parts came together using a QAYG method. Each part of the quilt has a different backing fabric: 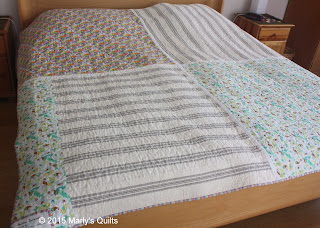 I only had standard width fabric, so piecing the back would have inevitable, even without this QAYG method. 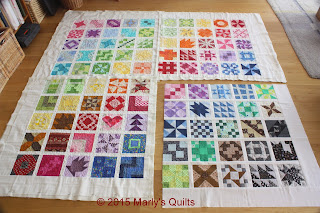 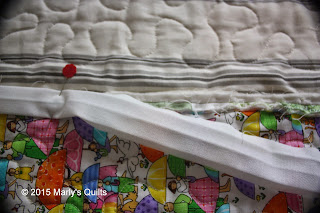 Quilting over the blocks is generally all-over stippling. I started with ambitions to quilt each block according to the patchwork design, but gave up on that idea quickly. It proved too difficult to keep a continuous line going, and with so much going on in the patchwork I decided there was little point in making the quilting complex. I didn't unpick the part I'd already done, so the discerning may find some non-stippled blocks.

Lastly I quilted the border, and added the label and binding. After about a week of deliberation: how did I want to quilt the border? Which quilting design would I do? I decided on a scrappy quilted border! There's something of everything, in my own non-too-perfect chaotic style! 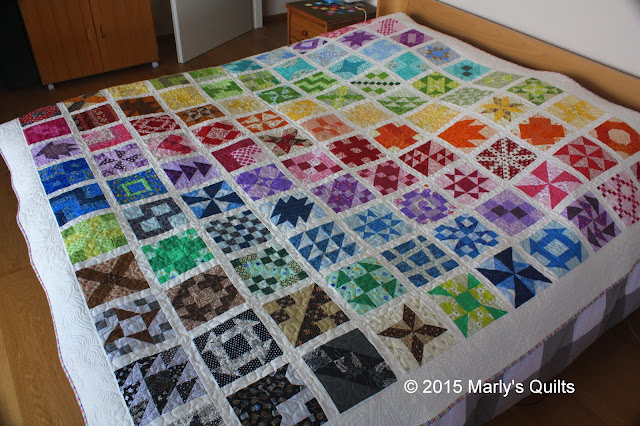 as they become available.

So pop over there to see what other quilters have been doing recently.

I shall be linking up to

at the end of June.

What a gorgeous rainbow! Beautiful finish. I love the flow of this one...very nice!

Your rainbow quilt is stunning! What a fabulous accomplishment!

Yay Marly! I am so pleased for you that you finished your quilt and I love how you quilted it. Very clever to quilt it in four pieces and then put them together with a QAYG method. Congratulations!!! :)

What a fantastic quilt! What a great finish. I loved your different styles on the boarders.

It's a beautiful happy quilt. I love all the little personal touches in your quilting.

It is GOOOORRRRGEOUS Marly!!! Great work! I love it. Congrats on this stunning finish.

What can I say....just simply a beautiful quilt--what a finish! hugs, Julierose

I love the rainbow order you put together with this quilt. Also, I really love that you broke the quilting down into manageable sizes and used QAYG - brilliant!

Gorgeous quilt! I've not seen brown and black in a rainbow quilt before; I like the effect--it sort of grounds it. And all that variety in border quilting seems quite appropriate for a sampler--and looks good too. I enjoyed the history too--nice to have back links.

Jenn @ A Quarter Inch from the Edge said...

Love all the fun little motifs in your quilting. Great rainbow-y finish. Thanks for linking up with TGIFF!

BEAUTIFUL quilt!!! Simply stunning!! Your quilting on it is so beautiful too :-) Congrats on the finish! Visiting from TGIFF :-)


~ Jess ~
Everything Is Coming Up Rosie

What a beautiful quilt! I just want to sit and look at every single block, they are all so interesting. Awesome finish!!

What a pretty rainbow of blocks! I bet they fun to make.

Had to pop over here to this your awesome finish Marly. I think your creativity on the borders really compliments the fun in the quilt blocks!

Wow, wow, wow. Great finish. Love the quilting. Love the back, love it all. Amazing quilt, so cool!

Great job! I am amazed at your finishing things off. I need lessons =)

Love this! There's somehing about rainbow colours set against white that really does it for me! :-). I'm piecing a huge quilt right now and I'm thinking I might try to join the sections using a QAYG method to avoid having to stuff a big quilt in my small domestic machine. Thanks for the inspiration.

Marly, What a fabulous quilt, and it's so huge! You must be so pleased to have it finished. Doing different quilting designs in the border was a stroke of genius.

Thank you for linking up with Free Motion Mavericks!

It's been to see all the different versions of the Rainbow Scrap Challenge Sampler quilt. Your's turned out beautifully! I love how you did "scrappy" quilting in the borders.

My version should be back from the quilter next week. I'm still trying to decide what to bind it with.

Marly, it turned out fantastically!! WOW! I love that you did different designs on the border! Congratulations on this finish! It has been so much fun seeing it come together!

Gorgeous Marly! That turned out beutifully, I smiled as soon as I saw it and love how it looks on the bed! Love your quilting especially the sun!

Awesome! I love it! Congratulations on a wonderful, colorful finish.

Congratulations on a beautiful finish! I love all the different quilting that you did on the border.

What a beautiful quilt! Sampler quilts are a major achievement! You must be so pleased with it. I love it! (visiting from Q2 Finish Along)

What a fantastic quilt. The layout is wonderful and the all over quilting worked out well. Congratulations on making such a stunning quilt.

Congrats on a great finish :)

What a fantastic quilt.

Your detail to small piecing is inspiring. THANKS so very much for rejuvenating this lovely piece of work at Tuesday Archives this week. :) :)